WMATA has been rolling out information about what will happen once the Silver Line opens. One part: a new map. The agency posted a draft for comments on its MindMixer site.

When the Silver Line joins with Orange and Blue, it will inevitably force some changes to the map. That’s because the current map has small station circles and thick lines, which works for two lines together but not three.

In our map contest, designers tried a number of different approaches: much thinner lines like in most cities’ subway maps, larger circle symbols, double symbols, or “pill”-shaped station symbols that could span more lines.

WMATA has taken a different approach with this draft. Each line got just a bit thinner, so that the station circles are slightly wider than a line instead of slightly narrower. For the 3-line segments, “whiskers” extend on either side of the station circles to tell riders that all trains stop there.

The map also abbreviates some stations which aren’t abbreviated today, like “Metro Ctr” or “Capitol Hgts,” and removes the cross streets.

What do you think of the proposed map? 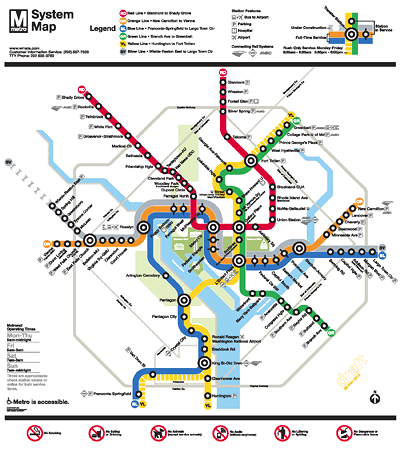 As was previously reported, Silver trains will go to Largo; the original plan was to turn them at Stadium-Armory, but Metro determined that the existing pocket track is not adequate.

To use the pocket in rush service, Metro needs to be able to pull trains of up to 8 cars in pretty quickly. If the switches have a wide radius and the pocket track is long, the trains can go in at higher speeds, but the pocket has smaller switches and a short pocket, which means pulling trains in will likely slow down other trains behind.

Since the pocket is on an aerial structure, there’s not room to expand it without massive expense, so Metro will send the trains to Largo (which gives Blue Line riders east of the river and in Prince George’s more frequent service as well).

Silver Line trains will run every 6 minutes during peak, 12 minutes off-peak, 20 minutes after 10 pm, and 12-15 minutes weeknights. This will combine with the Orange’s frequency from East Falls Church to Rosslyn and both Orange and Blue beyond that, but outside rush hours, people riding the line will likely have to do a fair amount of waiting.

Also, as we knew (but which won’t please riders hurt by Rush Plus), there will be even more Rush Plus. 2 Blue Line trains per hour during the peak will become Yellow Line trains from Franconia to Greenbelt. That makes room at Rosslyn for the Silver Line.

Riders north of Mount Vernon Square on the Green Line will see more service, but Blue Line riders from southern Fairfax, Alexandria, and Arlington going to Rosslyn, Tysons, or Foggy Bottom will have to wait longer for Blue trains or ride through downtown DC.

The only solution to this problem is a new terminal or wye at Rosslyn, so that more trains can come in from the south without taking away capacity from trains from the west. WMATA has proposed this as part of its “Metro 2025” plan, but there’s no funding yet for these important projects.