At 15th and L Street NW, where construction is underway to turn the now former Washington Post building into Fannie Mae’s new headquarters, the protected bikeway is also serving as a sidewalk. DC’s policies say this kind of situation should be avoided if at all possible, and in this particular case, it could be. 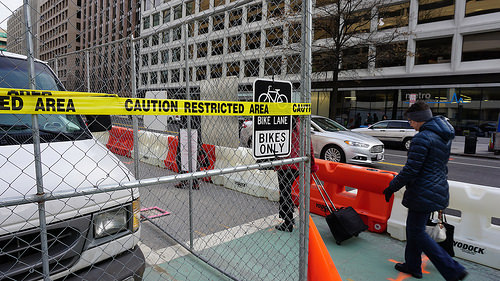 All photos by the author.

But what’s actually there is a series of signs, fences, cones, and plastic barriers establishing a single narrow chute that is partially blocked by fence stands. 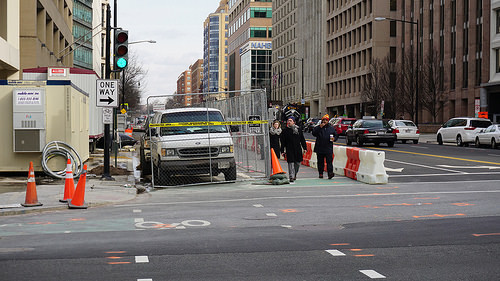 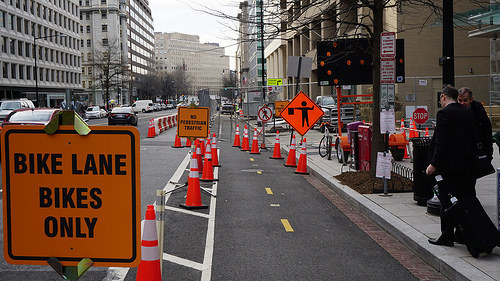 On paper this is an alternative track for bicycles only, because pedestrians are admonished to cross at the intersections and walk on the east side of 15th. What’s actually happening, though, is that people are taking the most convenient path they see, meaning cyclists, wheelchair users, joggers, people pushing strollers, and people on Segway tours are all sharing the space.

The rules say this shouldn’t happen

A few years ago, the DC Council unanimously enacted the Bicycle Safety Amendment Act of 2013. Among other provisions, the act included a measure to protect the rights of people who get around on bike and on foot.

Since the rule went into effect, any permit application has had to comply with the following new District Department of Transportation rule: When construction permit applications ask to close sidewalks and bike lanes, the applicant must submit a plan for safe and convenient alternatives, and DDOT has to approve it before issuing a permit. 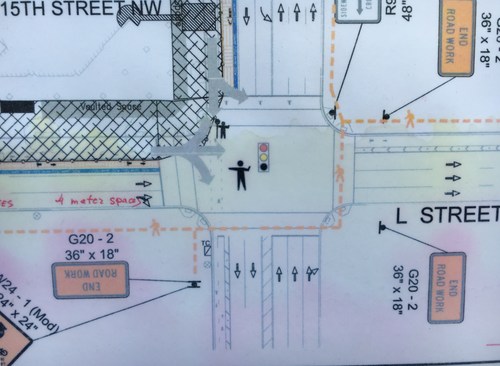 Detail of the traffic control plan.

The rules themselves are not radical: Maintain safe space separated from each other and other traffic for people who bike and walk, close parking and travel lanes if necessary to create that space, and add shared road markings and signage if cyclists must merge into general travel lanes. The standard “SIDEWALK CLOSED CROSS HERE” signs can only be used as a last resort when no other alternative exists.

There are alternatives here. The current traffic plan preserves five full-width driving lanes (two southbound, three northbound), and only removes a few parking spaces. Almost that almost half the space in this plan is actually occupied by the barriers themselves. The regulations allow taking more space from driving lanes, which could go a long way to easing the disruption.

Demolition on this site should be finished soon, then construction of the new building will take two to three years. DDOT has announced that Carr Properties and Clark Construction will host a public meeting to present the next steps for this project to the community. 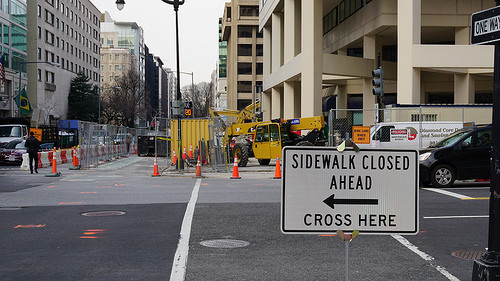 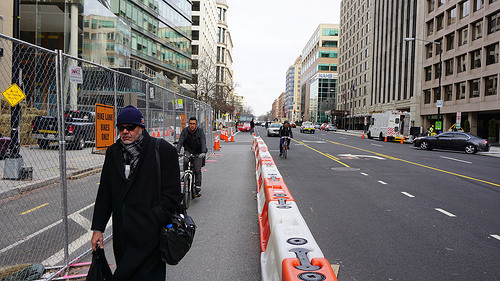 Protected bikeways like the one on 15th Street and L Street are a big part of the growth of cycling in the District. This one should remain open and useful during the ongoing demolition and construction project.