A women’s shelter in the heart of the Anacostia Business District.

Since plans were announced abruptly this summer, Anacostia residents have been pushing for a dialogue about a planned women’s shelter on Good Hope Road SE. Calvary Women’s Service, the organization behind the shelter, has ignored the community at every turn. Meanwhile, construction began on the future “Good Hope Kitchen” last week.

Opposition to the shelter has grown since the community was first notified, through an email from DC Council Chairman Kwame Brown touting the future arrival of the shelter.

The building, previously an Elks Club, employment training center, and Post Office, was purchased by Calvary this January for $950,000. Zoned as Class C-3-A, the building has a “buy right use” which does not require rezoning to provide supportive housing. As a result, the community has no leverage to prevent the project from going forward.

On June 30th, Greta Fuller, ANC8A03, sent Calvary a letter stating her resistance. “Bringing another social service to the business corridor of Anacostia will make it all the more difficult to bring in more businesses and shop owners.”

On August 18th, the entire 8A Advisory Neighborhood Commission sent DC Council Chairman Kwame Brown a letter requesting a meeting with CWS as pursuant to DC statute. Along with the letter were 22 pages of support petitions representing several hundred residents.

“It’s disappointing the parties involved don’t think it’s worth their time to sit down with the community that is affected to engage in a conversation,” said Charles Wilson, ANC8A04. “After repeatedly denying our request to meet, it shows that Calvary could care less about how we feel or what we think.”

“We don’t have any authority to intervene. This needs to be resolved by the executive.” said Joyce Clement Smith, Chief of Staff to Ward 8 Councilmember Marion Barry. Noting the growing unrest of the community, Smith said, “We are clearly aware of the opposition.”

Councilmember Barry struck a different tone yesterday in a twitter message, but this political rhetoric may be too little, too late. 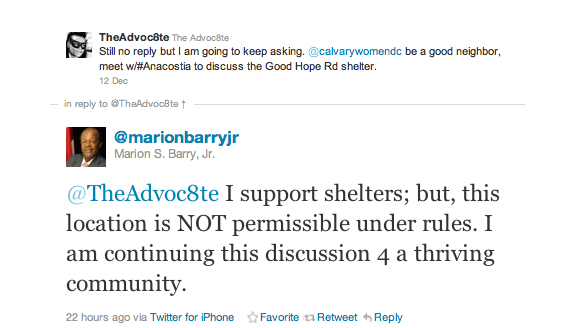 To compound the community’s frustration, in October Calvary launched a “grassroots fundraising campaign” to raise $100,000 in 100 days to support the building of the facility’s kitchen. Kristine Thompson, Calvary’s Executive Director, did not respond to repeated emails.

According to the press release announcing the campaign, “The Morris & Gwendolyn Cafritz Foundation has been the first to commit their support to the Good Hope Kitchen by offering a $50,000 matching gift for funds raised through project.” In response to an inquiry about what weight the community’s lack of support for the shelter played in the grant evaluation process, Rose Ann Cleveland, Executive Director of the Cafritz Foundation, wrote in an email, “I would suggest that you contact directly Ms. Kristine Thompson, the executive director of Calvary. She is the best source for information on the transitional housing program for women that Calvary provides and knows most about the many donors that support Calvary’s efforts.”

The community’s discontentment stems from its gnawing angst that further concentration of social service agencies will undermine Historic Anacostia’s fledgling business district. With the high profile Uniontown Bar and Grill facing an uncertain future, Anacostia’s retail future is all the more precarious.

“Everything they do for this community is to get people over, under it, around it, and through it,” said Reverend Oliver Johnson, a lifelong Anacostian and former ANC Commissioner, on a recent morning.

District leaders’ silence on the shelter project only reinforces residents’ feelings that politicians view Anacostia as a social service dumping ground. This taciturn endorsement of the convergence of relief agencies in Anacostia makes the neighborhood indeterminably unattractive to young families, a demographic vital to the city’s future says Johnson.

“Here’s the issue about any community that has rehabilitation as its primary function. You got St. Elizabeths Hospital - the only community in the city that has a mental health hospital - that releases to the streets. You got the largest methadone treatment clinic here, and the people from Virginia who don’t have methadone [clinics] anymore are coming here to DC.”

“I have a three year old grand son,” says Johnson, “and when I walk him down Good Hope Road, people say, ‘Singles and packs. Anything you want!’ My grandson asks, ‘Grandpa, what’s that?’ And I tell him, ‘They’re selling single cigarettes and drugs.’”

“Then we walk up the street. A man approaches and says, ‘Gotta dollar? Got fifty cents?’ My grandson asks, ‘What is he doing?’ I tell him he’s begging,” Johnson said. “I had one of the people say to my grandson, ‘Gotta learn how to hustle!’ I stopped and said my grandson is three years old. I said, ‘Don’t you know I will exercise some parking lot fellowship on you that you ain’t never seen.’”

“So what happens is, you got a 900 hundred people per day methadone clinic, The Good Hope Institute, you have a 12 step program for AA/NA called the Anacostia Young People’s club. And now this Kitchen. Everybody has a clean name. Nobody says who they are. They all have a clean socially acceptable name.”

According to Calvary’s website, the 14,000 square foot project comes at a price tag of $3 million and “will transform an abandoned building in Anacostia into a new home that will serve 50 women a night and provide 100 meals a day.”

While the investment is needed in Anacostia, the kind of use is not. No matter the redemptive mission of the shelter, its presence has the potential to be detrimental to the community in the long run. Additionally, Calvary’s refusal to meet with the community hasn’t allayed residents and property owners’ trepidations.

In the 70s and 80s, old center cities across the country discovered that headquartering human and social service agencies downtown dashed hopes of economic recovery. It would appear DC is now poised to re-learn this lesson in Historic Anacostia.