Much of DC’s Chinatown is about symbols. The neighborhood is small and fragile, seemingly forever on the brink of extinction. Its identity hinges on a smattering of things Chinese: the restaurants (of course), the red and green lampposts, the Chinese characters on street signs.

But without a doubt the most striking and enduring symbol of all is the great Friendship Archway, constructed in 1986 just east of 7th and H Streets NW, and said to be the largest in the world when it was constructed.

Boldly symbolic of Chinese identity, this project ironically was once plagued by controversy over what sort of China it truly symbolized.

Chinatown originally developed in the late 19th century around Pennsylvania Avenue NW at 4½ Street (now John Marshall Place). Chinese immigrants to the US in those days faced discrimination and downright hostility; the creation of Chinatowns in Washington and elsewhere in the country was as much a defense mechanism as anything else

a way to create safe havens where new immigrants could find shelter, sustenance, and employment.

Washington’s original Chinatown was forcibly disbanded in 1931 when the land was taken over by the government for the Federal Triangle and other municipal projects. A new Chinatown was soon established (against the wishes of local businesses and landowners) along H Street NW between 5th and 7th.

By 1981, however, Chinatown seemed on the verge of extinction. Successful Chinese Americans, like many others, had dispersed to safer and more prosperous parts of the city and its suburbs. Chinatown still had a cluster of restaurants and grocery stores, but the decline of the old downtown area made many wonder whether commercial establishments such as these would remain viable in the future.

Two Chinatown leaders, Dr. Dwan L. Tai and Alfred H. Liu, wrote a paper entitled “The Future of Washington’s Chinatown: Extinction or Distinction,” in which they argued in favor of creating a visible attraction, such as an archway, to serve as a magnet for visitors. The idea began to gain traction.

In May 1984, Mayor Marion Barry and other top city officials took a trip to Beijing, and the dreamed-of archway project finally got its start. Beijing Mayor Chen Xitong had visited Washington the previous fall, and Barry was returning the favor to promote Washington as an international business and finance center.

After surviving a welcoming banquet that included fish stomach and beef tendon soup, Barry went on to participate in a ceremony establishing Washington and Beijing as sister cities. As part of the agreement, the two cities would work together on a project to build a traditional archway in Washington’s Chinatown.

The principal designer would be Alfred Liu, a well-established architect and chairman of the Chinatown Development Corporation who had emigrated form Taiwan as a teenager and who had designed Chinatown’s Wah Luck House, a distinctive apartment building for low-income and elderly residents. 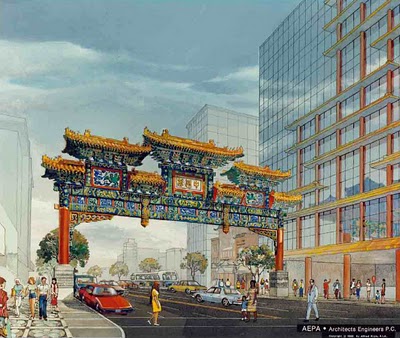 Original rendering of the Friendship Archway. To the right is the planned Far East Trade Center, which was never built. Photo from AEPA Architects Engineers P.C.

Immediately a contingent of prominent Chinatown businessmen began to cry foul. They objected to the participation of the communist People’s Republic of China in the archway project, many of them having strong ties with mainland China’s rival, Taiwan.

The Washington Post quoted Lawrence Locke, chairman of the Chinese Consolidated Benevolent Association of D.C., as saying that the archway “might misidentify the local Chinese community with the Chinese communists.” Locke reportedly had collected more than 50 signatures from Chinatown residents and businessmen on a petition opposing the project.

Locke also reportedly claimed to have assembled $250,000 in pledges for a separate project to construct an arch without any involvement of the mainland Chinese government. The arch’s opponents had enough clout to get their DC Council representative, John Wilson, to introduce a resolution opposing the arch’s construction.

In July 1985, a resolution of sorts was reached: there would be two arches in Chinatown, both on H Street, two blocks apart. The Friendship Arch to be built in cooperation with the People’s Republic of China would be located, as originally planned, just east of 7th Street. A rival Chinatown Community Arch would be constructed two blocks away, just west of 5th Street.

The Chinatown group promoting the second arch wanted to put it at the other end of Chinatown, at 9th and H Streets, near the old convention center. In fact, they might even build two arches to serve as gateways at either end of Chinatown. In the end, however, specific plans never came together; doubts were raised about the wisdom of investing scarce funds in “rival” arches, and none were built.

The finished archway, or paifang in Chinese, is an impressive engineering achievement, standing 47 feet tall at the top of its highest roof, spanning 75 feet of roadway, and weighing over 128 tons. The roofing alone weighs 63 tons, supported by 27 tons of steel and 38 tons of concrete.

Over 7,000 glazed tiles cover its five roofs, and 35,000 separate wooden pieces are decorated with 23-karat gold. A riot of dragons, 12 carved and 272 painted, glare and grin from every angle.

The style is evocative of the classic Qing dynasty (1649-1911), a period when China showcased its imperial splendor. Indeed, paifangs were traditionally erected across alleys and roads throughout China, with the more elaborate ones, like Washington’s, often to celebrate the emperor on the occasion of one of his military victories. The golden color of the tile roofs on the Washington archway is symbolic of wealth and honor, as were the yellow mandarin jackets bestowed as a supreme honor on Qing officials.

Construction began in June 1986. The District first built the reinforced concrete frame and supporting pillars, according to Liu’s design. Major decorative elements, including the 7 pagoda-like roofs, were fabricated in China and installed on the arch by 16 skilled Chinese craftsmen brought to Washington by the D.C. government under the supervision of Liu.

The Beijing Ancient Architectural Construction Corporation was in charge of work in China, including fabrication of the 59 intricate dou gong supports

complex, cantilevered contraptions of carved wooden brackets, balanced and interlocked with tenons and mortises rather than nails or screws and providing a sturdy and resilient support for the gracefully curved roofs. The dou gongs have a very festive appearance, almost like frilly Victorian bloomers peeking out from beneath the golden skirts of the roofs. 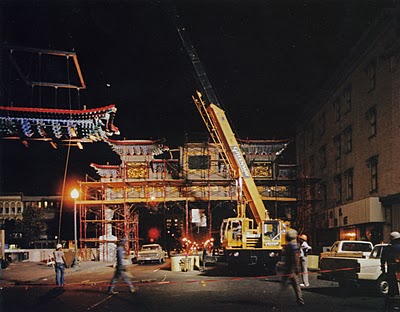 In ancient China, these elaborate structures were painted to protect the wood from the elements. By the time of the Ming and Qing dynasties, the painting had become an opportunity for magnificent polychrome displays. One of the chief tasks of the 16 artisans brought to Washington was to apply red, blue, and green paint, gold leaf, and other finishing touches by hand.

The arch was constructed over a 7-month period, much of the work needing to be done at night so as not to block traffic on busy H Street. The finished monument was officially dedicated in November 1986.

Once completed, the archway was widely celebrated, and the political squabbles about how it should be built soon died down. The giant monument seemed almost shockingly bright and festive. Linda Wheeler, writing in The Washington Post, called it “a brilliant multicolored flower transported into a drab landscape.”

Benjamin Forgey, the Post‘s architecture critic, observed that “Simply put, before the gateway there was not much to remember Washington’s dwindling Chinatown by, and now there is…. It is a fitting, striking, and quite beautiful object.” Forgey saw the archway as a signpost for the major tourist attraction that Chinatown could become. But that was still an unrealized dream in 1986. The arch’s magnificence contrasted starkly with the drab landscape then surrounding it.

Both the archway and its neighborhood have had ups and downs in the years since its construction. In 1989, after the crackdown by Chinese authorities in Tiananmen Square, the DC Council enacted a resolution suspending relationships with sister-city Beijing. Council chairman David A. Clarke personally climbed a ladder to drape black mourning cloth on the Friendship Archway to commemorate the students killed in China.

Soon, the archway unexpectedly began to deteriorate. It turns out much of the mortar used to set the tiles in the roofs did not bond correctly. According to Liu, this was due to the fact that the Chinese artisans’ visas were delayed, forcing construction to continue into October, when cold weather compromised the mortar. In any event, tiles began to fall off within several years of the archway’s completion.

In June 1990 one of the 100-pound carved dragons fell off, striking the roof of a soda truck. It was an ominous event. Since such a gateway traditionally is, among other things, a manifestation of imperial splendor, some Chinese would say the fall of one of its dragons portends the emperor’s own immanent fall.

Sure enough, on that same evening Mayor Marion Barry took to the airwaves to announce that he would be stepping down when his term ended and not running again in the fall elections, as he had been planning. Barry had been arrested at the Vista Hotel in a sting operation in January; he would be found guilty of one charge of possession of cocaine and sentenced to a 6-month prison term.

Meanwhile, DC workers removed the rest of the tiles as a safety measure until permanent repairs could be made. In 1993 a major renovation project was undertaken, funded by both the DC and Chinese governments. Artisans from the same Chinese company that had worked on building the arch again traveled to Washington to perform extensive repairs, including re-laying tiles with improved mortar, repainting decorations, and reapplying gold leaf. Since that time, there have been no more problems with falling tiles or dragons, which should come as a relief to the city’s subsequent mayors. 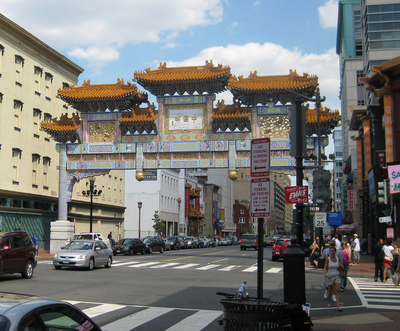 The archway in 2008, before restoration. Photo by the author.

The paint applied in 1993 held up well but after many years became quite faded. In 2009 a second repainting and modernization project was undertaken with funding from the DC Commission on the Arts and Humanities. The entire archway was sanded and repainted, and several pieces of tile and wood were replaced.

In addition, a new lighting system was installed, using advanced, energy-efficient LED lights. The brilliant, vivid archway is now at the center of one of downtown’s liveliest neighborhoods, and its bright colors now compete with gaudy shops, restaurants, and outdoor video displays.

It’s as if the neighborhood, inspired by Alfred Liu’s creation, has finally caught up. But however commercialized and un-Chinese the various nearby storefronts become, the Friendship Archway remains an enduring and unforgettable symbol of the neighborhood’s heritage and the city’s rich multicultural fabric.

Cross-posted at Streets Of Washington.