The federal government will soon vacate most of Water Reed hospital in northern DC, and DC officials are currently pondering potential uses and getting community input. Metro’s proposal to build a new bus garage should be part of the final plan.

Federal base closure rules restrict the uses to government and non-profit, so DC can’t simply let developers build some condos and grocery stores on the site. It can be used for public health, prison, homeless assistance, seaports, and more. A seaport is probably not in the cards, but a bus garage would be a great use of some of the space.

Why does DC need a new bus garage? Its two bus garages in the northern part of DC are falling apart and neighbors would rather use the land for other purposes. The 175-bus Northern garage, along 14th Street between Buchanan and Decatur Street, needs a massive overhaul. However, the local community is strongly pushing to remove the garage entirely.

Meanwhile, the 138-bus Western garage occupies an enormous tract of land right on top of the Friendship Heights Metro, creating an empty block-long wall right on Wisconsin Avenue and heavy bus traffic on the smaller streets in the neighborhood, where the garage entrances lie. Many residents would love to see more street-activating uses on Wisconsin and remove the bus traffic.

However, these buses would have to go somewhere. Who wants a bus garage? Nobody wants one in their neighborhood, but Walter Reed represents a great opportunity. It’s a huge site, and WMATA could build its garage in one of the interior spaces. Many buses could exit directly onto 16th Street, which is not a neighborhood street at all. Meanwhile, the Georgia Avenue frontage could get other uses that more directly serve residents on Georgia Avenue. 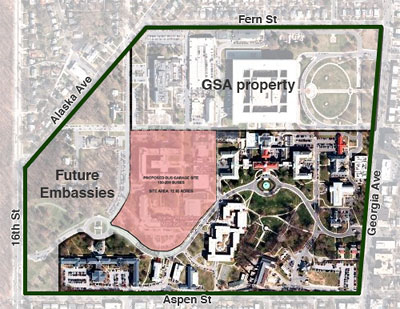 One potential site for a bus garage at Walter Reed. Images combined from WMATA and DMPED.

Alternately, WMATA has made some sketches of a bus facility that could front onto Georgia with a more attractive facade. However, putting it farther west seems to make the most sense.

The best aspect of this option is that it could return two significant parcels of land in dense neighborhoods back to the tax rolls. DC can’t get tax revenue from Walter Reed itself, but it can get some from the Northern and Western garage properties. WMATA would sell those properties and use the money to fund the new garage, and DC could get stores, apartments and townhouses right on the growing northern 14th Street commercial corridor and atop the Metro in lively Friendship Heights.

If WMATA doesn’t get to do this, they’ll have to invest substantial resources into rehabilitating the existing garages, ensuring those stay where they are and annoy neighbors for another generation.

WMATA’s long-term bus plan calls for closing Northern in 2014 and rehabilitating it until 2016. WMATA would temporarily move Northern’s bus operations to the DC Village facility in Southeast DC, which will replace the Southeastern Bus Garage that closed in 2008. DC Village is scheduled to open in 2012 and will have enough capacity to handle the buses at Northern. However, WMATA will have to spend millions of dollars a year in extra fuel and driver pay to deadhead buses from DC Village up to routes in northern DC and southern Montgomery County, which translates into high costs for the local jurisdictions. 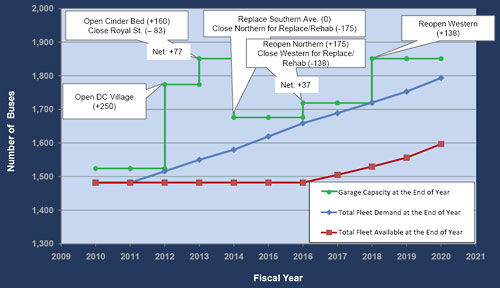 Summary of bus fleet and facility growth, from WMATA.

After Northern is rebuilt, they would close Western, shift its buses to Northern, and rehab Western until 2018. All three garages, as well as the others outside DC, are necessary if WMATA wants to have enough buses for the anticipated growth in ridership by 2020.

The Deputy Mayor for Planning and Economic Development is rightly working with residents right around Walter Reed to identify the uses they’d prefer for the site. However, especially for the parcels that aren’t immediately adjacent to residents or businesses, they should also consider the bigger picture. A new garage in the interior of the site would help residents in two other neighborhoods without harming the Walter Reed neighbors, bring in more money for the DC budget in the long run, and ensure that our bus service can continue to grow as more and more residents use transit.