Bus rapid transit lines in the United States badly lag the world’s most high-quality systems. This photo from Buenos Aires shows why: No US city is willing to dedicate so much street space to buses. 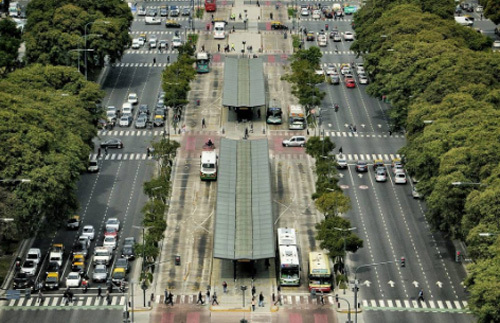 Count the lanes dedicated to the busway in that picture. Including the stations, medians, and bus lanes, it totals about eight lanes worth of traffic.

It takes that kind of dedication to fulfill BRT’s promise of subway-like service and capacity. You need all the components: Multiple bus lanes including passing lanes, big stations physically separated from the sidewalk, unmistakable barriers between the busway and general traffic.

Can you imagine any US city dedicating eight lanes to buses on a single street? On most streets we couldn’t do it even if we wanted to. K Street is 10 lanes wide including its medians, but Georgia Avenue and H Street are generally only six. 16th Street is five lanes at the max. Even if we completely banned cars from those streets, we’d lack the width to build Buenos Aires-style BRT.

Admittedly, Buenos Aires is an extreme example. This photo is from Avenida 9 de Julio, possibly the world’s widest city street. Planners there had an incredible amount of space to work with. Bogota’s famous TransMilenio BRT is probably a more instructive example; it takes more than five lanes.

We wouldn’t want to anyway

Even if cities in the United States had both the physical space and political will to dedicate five-to-eight lanes to buses, there would be big trade-offs in doing so.

Streets that are too wide or have too-fast-moving traffic are hard for pedestrians to cross, and thus create barriers that can destroy a city’s walkability.

Bogota’s awesome five lane busways are practically highways, accounting for the several lanes of car traffic on either side. And like highways, they’re very good at moving vehicles and very hostile to pedestrians.

About the only way to make such a wide busway work on a city street without creating a highway would be to dedicate the entire street to transit, and not have car lanes on either side at all. Some US cities do have transit-only streets, so that may well be possible. But it would be different than South America’s model. 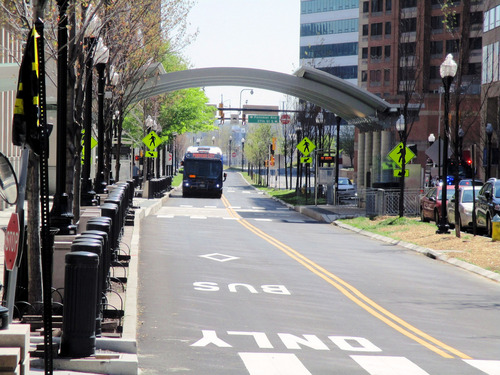 Smaller busways make sense for the US

None of this is to say that BRT in the United States is hopeless. It’s absolutely possible to build a solid and useful BRT line without quite that much street width. They just won’t be comparable to a subway in speed or capacity without passing lanes and gargantuan stations.

But who says they need to be?

Narrower busways like in Arlington and Ontario still offer tremendous advantages over running buses in mixed traffic. They speed up buses a lot, and are vastly more practical when retrofitting existing streets.

And while it’s true that North American-style busways can never have such high capacity as South American ones, well, that’s what rail is for.

It would be silly to insist one mode, any mode, must on its own accomplish all a city’s needs. Smart planning matches the need to the corridor, and is flexible enough to use the right mode, and the right street design, on every corridor, given the specific issues of that location.