WMATA’s Board of Directors held a Safety and Security Committee meeting earlier this month. Among the things we learned: curved tracks are harder to maintain, broken parts may have led to August’s derailment, and the agency relies too much on some temporary fix measures. 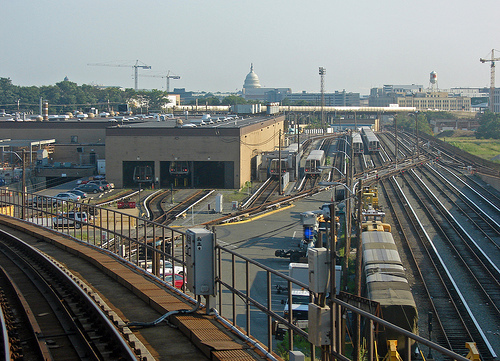 After the derailment, WMATA’s track maintenance/engineering (TIES) department was told to reinspect every mile of track in the system by Jack Requa, WMATA’s Interim GM/CEO, which is why you’ve seen slowdowns and delays especially recently.

The inspection was 60% complete at the time of the board meeting, so there’s a possibility of additional speed restrictions being placed on parts of the other 40% of the system until it finishes.

As part of the inspection, WMATA is looking at all of its track for issues. Curves can be more susceptible than straight sections to the “wide gauge” issue that we saw in August that caused the train derailment. Wide gauge is where the two rails making up a train track expand far enough apart that the train’s wheels can “slip” between them.

WMATA has 41 curves in the system with a radius of 800 feet or less, which means they’re pretty sharp. The smaller the radius of a curve, the more lateral forces - when a train pushes left or right on the rail due to the train’s momentum - are exerted on the track when a train is running at the same relative speed.

As you can see in the photo above and in Figure 7.2 on this site, the outer rail on the curve experiences more stress, as it “pushes” back on the train to keep it on the tracks. If there are enough broken fasteners on the outer rail, it can start to expand outwards, which is a problem. Figure 7.4 from the linked article shows how a derailment could happen if a rail ends up moving out of place.

Upon Requa’s system inspection request, WMATA looked at the 41 narrow curves by the September 3rd Board meeting and placed some level of speed restriction on 26 of them. Speed restrictions generally mean that some kind of repair is required in order to bring them back up to normal service. For the 26 curves, this work is an ongoing process.

In addition to the 26 speed restrictions put in place, WMATA track inspectors found 20 level black issues on the system’s tracks during the inspection. “Level black” means the track is in a state where it should be removed from service immediately and repaired.

Rob Troup, the head of the TIES division at WMATA, said that this isn’t necessarily an unusual number. However, due to the entire system being re-inspected by the Track Geometry Vehicle (TGV), it was unclear as to whether the 20 level black issues had been missed in previous inspections, or were simply new issues due to regular wear and tear.

One new policy WMATA implemented after the derailment requires a crew of workers to always follow the TGV on inspections. This previously only happened when the TGV performed ultrasonic testing of the rails at up to 15 mph, and not the higher-speed visual inspections. The addition of the chase crew means WMATA could fix issues as soon as they’re found without having to wait until the end of a shift.

A second new policy put in place requires the TGV operator to sit down with a manager after her shift and discuss the TGV-generated report of noted track defects. WMATA expects this to be a way to verify that the TGV operator has not deleted any exceptions that would need to be fixed later, as was what happened a month prior to the derailment.

WMATA board member Leif Dormsjo, the director of DDOT, noted the previous policy that required no verification was a significant hole in the policies in place, and sounded audibly unconvinced when asking staff about it during the safety meeting. Another board member, when clarifying the situation, compared the accidental deletion to if the operator “pressed delete on an email before he read it.”

Broken fasteners can lead to derailment

Track fasteners are the devices that hold the track in place to keep it from moving. It’s possible that problems with fasteners contributed to the August derailment. 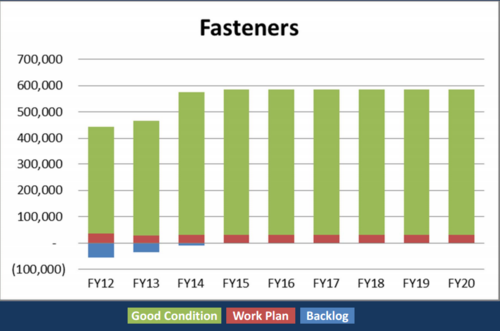 This graphic shows the number of fasteners in the WMATA system, and the yearly plan for replacement. Image from WMATA.

A number were found to have been broken where the train derailed on the upper (higher) rail in the curve. Troup noted that the agency had replaced 27,000 fasteners during 2014. The entire system excluding the Silver Line extension has 550,000, meaning 5% were replaced in that year.

Fasteners for the lower rail on the curve had already been replaced, and work to replace them for the upper rail was being planned. While the style of fastener is not necessarily an issue, the fact that broken fasteners may have been missed by two types of WMATA inspections, is.

WMATA’s yearly goal is to replace on average 31,000 fasteners in order to reduce and eliminate their backlog shown in the chart, and to keep the system in a state of good repair. The fastener replacement backlog was supposed to have been completed by 2015, however the latest information we have available is from October 2014.

Gauge rods are a temporary fix, and they’re overused 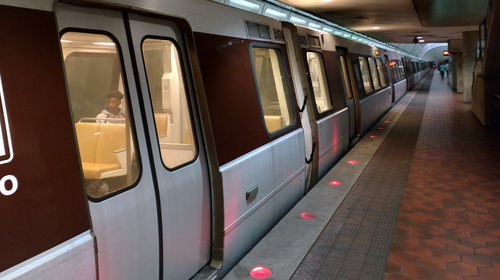 Photo by the author

Metro uses what are known as “gauge rods” as temporary fixes to return tracks to revenue service. These rods are essentially metal hooks that keep a track’s two rails spaced evenly. If the track worker group does not have the tools or equipment to put in a permanent fix right away, they sometimes use these instead.

James Dougherty, WMATA’s former Chief Safety Officer, noted that his department had found some rods in the location of the derailment during an inspection afterwards, but was unsure if they were there when the derailment happened. Troup noted there was no procedure for how often the rods could be used, or with what frequency and spacing.

Possibly due to the lack of procedures for proper gauge rod usage, Troup noted TIES at times has a tendency to use gauge rods to return tracks to service in order to run trains, instead of spending extra time fixing issues correctly. Troup laid out a plan to lessen the frequency of this practice in the future, and effect permanent fixes to the track the first time an issue is noticed.

Between the potential overuse of gauge rods, the lack of verification in TGV procedures, and possibility that two forms of inspection missed broken fasteners, it is obvious WMATA’s policies leave room for mistakes and oversights to be made. The agency has significant room for improvement and needs to fix lackadaisical management practices, and it seems that several board members now acknowledge that.

The dive into agency procedures and operations in Thursday’s committee meeting provided a necessary look into some of the human and process failings of the system. This again was an opportunity to allow the WMATA Board of Directors to start thinking about what is needed to create real, long-lasting improvement for WMATA. Clearly, it’s not here yet.

Leif Dormsjo: So…I’d like to know how you had a process that allowed for those two [issues], and who signed off on that process. Was it the GM? Was it you, Rob? Did the safety department sign off on it?

Rob Troup: The process was internal to the track workers.

Troup: I do not believe so.