Students have been leaving DC Public Schools in droves after the elementary grades because of a dearth of appealing middle school options. A series of graphs from DC’s Office of Revenue Analysis shows what’s been happening and suggests that things could change in the future. 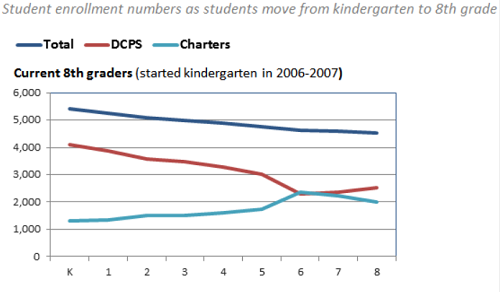 All graphs from the DC Office of Revenue Analysis.

Looking at the DCPS cohort that entered kindergarten in 2006 and is now in 8th grade, there’s been a dramatic drop: from about 4,000 in kindergarten to a little over half that number in 6th grade. Much of that decline occurred between 5th and 6th grade, the first year of middle school.

While a number of DCPS elementary schools have improved in recent years, parents have complained that the system’s middle schools suffer from low achievement, discipline and safety issues, and a limited range of academic and extracurricular offerings.

Only one DCPS middle school, Alice Deal in Ward 3, has proved widely attractive. And with an enrollment of 1,300, Deal is overcrowded.

At some elementary schools, parents begin leaving after 4th grade for private schools, other DCPS elementary schools that feed into Deal, or charter schools, many of which start their middle schools at 5th grade. Some leave the District altogether.

At Ross Elementary School in Dupont Circle last year, for example, the number of students fell from 19 in 4th grade to nine in 5th. In the previous three years, only one of the 47 students graduating from 5th grade went on to the middle school that Ross feeds into.

On Capitol Hill, where some parents have made a concerted effort to retain students in neighborhood schools, enrollment can drop as much as 50% between preschool and 5th grade.

And a Washington Post poll last year found that only 24% of District residents would choose to send their children to a DCPS middle school. Among white and college-educated parents, only 20% would make that choice.

During last year’s mayoral campaign, both leading candidates made improving middle schools a key issue, with Muriel Bowser adopting (at least for a while) the slogan, Deal for All.

And DCPS Chancellor Kaya Henderson has focused on middle schools this school year, ensuring a standard baseline of academic offerings that includes algebra, foreign language, art, music, and physical education. She pledged more of an emphasis on students’ social and emotional needs as well.

Henderson also promised more field trips, and recently she and Bowser unveiled a plan to offer middle school students who are taking a foreign language the opportunity to travel abroad.

It’s too soon to know if any of those efforts will bear fruit. The current DCPS 6th grade cohort started out smaller than the 8th grade one, but its decline has been less precipitous. So the number of students remaining in DCPS at 6th grade is about the same in both cohorts. 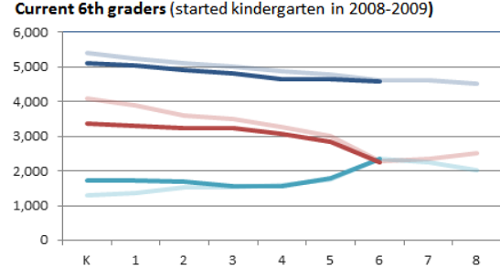 The DCPS cohort now in 4th grade shows the least attrition of all. Although it started out smaller than the cohort of current 8th graders, it’s now about the same size that cohort was in 4th grade. 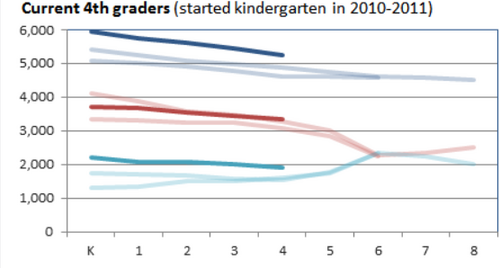 It’s hard to say how many of these students DCPS can hold onto. A wider array of courses and more field trips, even international ones, may not be enough to do the trick.

There have been some bright spots. One middle school east of the Anacostia River, Kelly Miller, has made dramatic improvements under a dynamic principal.

And the new Brookland Middle School, which opens this fall with an arts focus and a project-based learning approach, drew more applicants than expected in the school lottery. That may be a vote of confidence in the school’s incoming principal, who is transferring from the well-respected Janney Elementary School in Ward 3.

The interest in Brookland is particularly encouraging because DCPS delayed the school’s opening by a year, partly out of concern that it wouldn’t attract enough students.

But Hardy Middle School north of Georgetown is still struggling to draw neighborhood students, even after DCPS installed a school leader who seems to inspire confidence.

And Ward 6 families are disappointed that long-promised renovations at two of the neighborhood’s middle schools, Eliot-Hine and Jefferson, won’t be happening for several more years. Those schools have also been slow to implement a plan to adopt an International Baccalaureate curriculum that could draw neighborhood students.

It can be hard to turn a struggling school around, and even harder to change public perceptions. The experience at Brookland suggests that DCPS might have more success with brand new middle schools, and the plan for new school boundaries and feeder patterns calls for the construction of several.

But DCPS has been spending hundreds of millions building and renovating buildings, particularly high schools, and it’s not clear how much more money will be available for such projects.

Some DC parents who have taken the plunge into what seems like a less desirable middle school have been pleasantly surprised. One Capitol Hill mother who passed up a well-regarded charter school for her daughter in favor of Eliot-Hine told the Post that her concerns about safety were unfounded and that she and her daughter are happy with the school.

“I feel like we wasted a lot of time and effort fretting for a year on the pros and cons of the school we considered,” she wrote in an e-mail. “We could’ve focused that energy on [Eliot-Hine]!”

If more parents were willing to give their neighborhood middle schools a chance, the pace of change might well speed up. And then we could turn our attention to an even thornier problem: improving the quality of DCPS high schools.