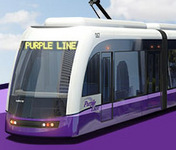 Photo from the State of Maryland.

Hogan announced his decision to build the light rail line at a press conference at 2:30 this afternoon.

To reduce costs, trains on the Purple Line will come every seven and half minutes rather than every six. The state will not change the alignment, nor the number or location of stations.

The longer headways mean there need to be fewer trains, saving money, and also cutting out the need for one staging area. Hogan also announced that the state would now pay only $168 million, rather than, he said, the original $700 million (but the state’s future contribution had only been $333 million). Montgomery and Prince George’s would have to pay more, though the exact amount, and whether they can do so, was not yet clear.

The Purple Line has been on the books for decades, and enjoys wide support in Maryland’s urban and suburban communities surrounding DC. It was primed to begin construction this year, but Hogan has been threatening to cut it since entering office.

Our neighbors in Baltimore are not so lucky. At the same presser, Hogan announced the Baltimore Red Line will not move forward as currently conceived. Hogan said the line is not cost-effective, and specifically singled out the $1 billion tunnel through downtown. He said the administration is still considering ways to change the project and left the door open to building some sort of transit in Baltimore in the future.

The savings will instead go toward nearly $2 billion in road and bridge projects all across the state, including widening Route 404 on the Eastern Shore, some unspecified “congestion reduction” on I-270, and new ramps to and from the Greeenbelt Metro to accommodate a future FBI headquarters.