There are more people in their 20s and early 30s in the center of the region than there were in the past, but farther out, they’re less prevalent. A great set of graphs from UVA’s StatChat show the change: 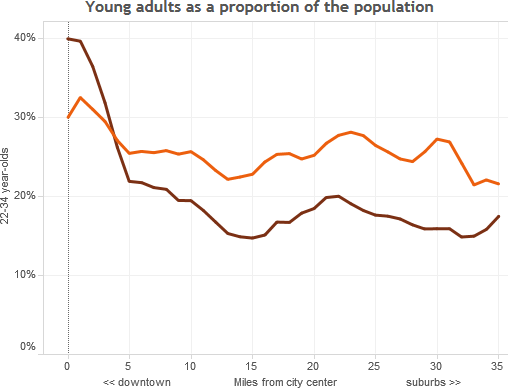 Graph for the Washington area. Image from UVA StatChat.

The orange line represents the 1990 Census; the brown one, the 2008-2012 ACS 5-year estimates. This counts people from age 22 (to try to exclude college students) to 34 (the usual line between Millenials and Generation Xers).

The StatChat post emphasizes that if the 2012 line is lower than the 1990 line, that doesn’t mean young people are abandoning that area. Rather,

So if you pick a random smaller US city not known for its “creative economy” hub, the percentage of young people has declined at all distances. But the trend is very different close to many city centers, including ours.

The StatChat post also reminds us that just because more Millenials are moving to the center, it doesn’t mean all are. Young people live everywhere. And, as Dan Reed has pointed out, many are clustering around other urban places like Silver Spring, which doesn’t show up on this graph since it’s aggregated with everything else six miles from downtown.

I’m curious why our region has (and had in 1990) a peak around 22 miles from the core. Is that the “drive till you qualify” line where housing is cheap enough for younger people to afford? Or is there a specific area with a lot of younger people around that distance? Any ideas?