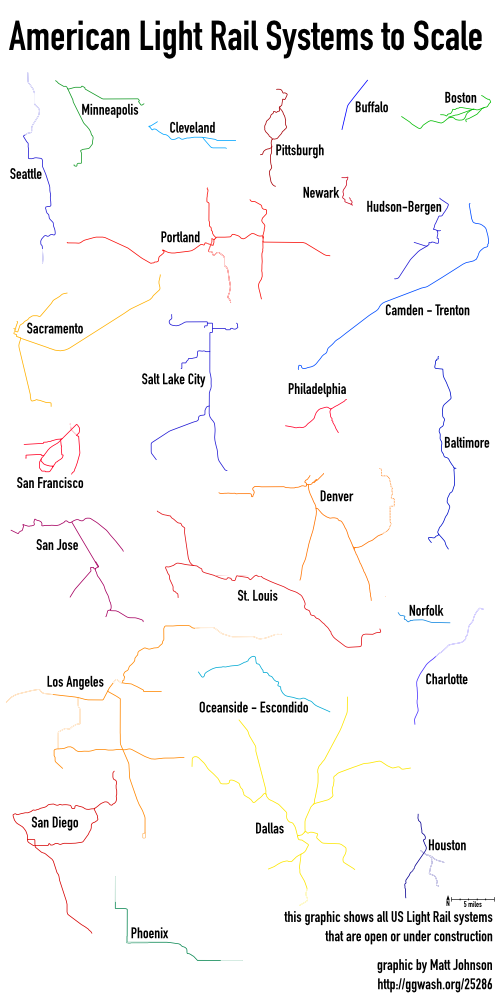 Twenty-six American cities have light rail systems. Several of these systems have extensions under construction, identifiable here by the dashed lines.

The largest system is in Dallas, with 85 route miles. The shortest is in Buffalo, where the single line stretches just 6.4 miles.

The light rail systems are very diverse in nature. Some evolved from historic streetcar systems, as was the case in Newark, Pittsburgh, and a few other cities. In some cases, it’s difficult to distinguish these from streetcar systems.

Most of the other cities built their modern light rail systems from scratch. San Diego’s was first, opening in 1981. Since then, modern systems have multiplied, opening across the nation in places like Phoenix, St Louis, and Baltimore.

These light rail systems fall all along the spectrum between streetcars and rapid transit. In San Francisco, for example, outside of the Metro tunnel many of the light rail lines run in the street with simple “flag” car stops every block or so.

On the other hand, a few systems operate much more like rapid transit. In Los Angeles, the Green Line, which runs from Redondo Beach to Norwalk, is completely grade separated for its entire length. In Seattle, the Link (and its under construction extensions) is almost entirely grade separated, except for a few segments south of downtown.

There are a few systems that are on the border line. Two diesel light rail systems are on the graphic: The River Line between Camden and Trenton, and the Sprinter in northern San Diego County. These systems are a little different from the other light rail systems, since they have longer spacing between stops like a commuter rail line. But their frequencies are like urban transit. So even though they’re not electrified, these are still light rail.

Similar systems like Austin’s Capital MetroRail, the Dallas to Denton A-Train, and Portland’s Westside Express Service are not included. While these operators use vehicles that are much like those of the other diesel lines and also have long stop spacing, their frequencies and hours of operation are more like commuter rail. Because these fall more on that end of the spectrum, I did not include them in the graphic.

In the previous post, many of the comments focused on systems that I did not include in the streetcar graphic. Several of you, for instance, asked why the map of San Francisco only showed the F Line but not the rest of the Muni Metro. I contended that the Muni Metro was light rail and not streetcar, but some of you were unconvinced.

But since the discussion was so active, I decided to make a graphic showing all of the light rail and streetcar systems in the United States at the same scale.

Whenever a city has both light rail and streetcar, I’ve shown the different modes with different colors. For example, in Seattle, the Link light rail is shown in blue, while the two Seattle Streetcar lines are shown in purple. The streetcars also have a thinner stroke than the light rail lines.

This graphic should help give a sense of the scale of the different types of systems. The light rail systems tend to be more regional in scope, while the streetcar systems are generally concentrated in the urban core.