Budgeted since 2011 and in planning since 2008, the District Department of Transportation finally began moving on a streetscape improvement project on Kennedy Street NW, a long overlooked commercial corridor north of Petworth. The $8 million project is spurring excitement in the community, though a curious ‘cul-de-park’ has drawn some skeptical reactions from businesses and residents.

Is there any way to fix this intersection for everyone? Image from Bing.com.

The Kennedy Street Development Association (KSDA) has made this project a primary objective since it formed a year ago. Residents and businesses spent much of 2014 pushing the District government to move on the project, and successfully lobbied the Council to increase the budget for the project by 30%.

DDOT is finally getting started after some long delays. Its design consultants, Sigma Associates, presented their initial plans in November. Sigma’s plan includes what it calls “typical improvements” to sidewalks, lighting, tree boxes, crosswalks, receptacles, and curb accessibility all along the street. In addition, Sigma wants to make “special improvements” at Georgia and North Capitol, which serve as the corridor’s gateways, as well as improve safety at the intersection of Kennedy Street, Missouri, and Kansas Avenues.

Sigma’s plan would fix some of the street’s longstanding shortcomings —it had only minor improvements over a decade ago, and most of those are well-worn. Most of Sigma’s plan is basic and unremarkable, so much so that a DDOT representative once called it ‘streetscape lite.’ 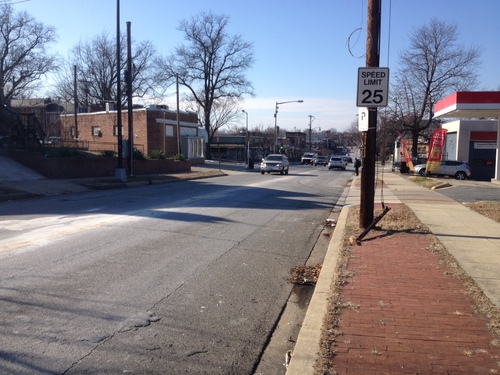 Facing west from the 200 block of Kennedy Street NW. If DDOT accepts Sigma’s plan, this stretch of the street near the Exxon will become a cul-de-sac, surrounded by benches to create an ‘urban park.’ Photo by Danielle Parsons Smith.

The project is not, however, without controversy. A number of attendees at DDOT’s kick-off meeting in late November said they were skeptical of Sigma’s proposal to rebuild the Missouri-Kansas-Kennedy intersection. Both of Sigma’s alternative intersection plans include closing Kennedy off from the Missouri-Kansas intersection, eliminating direct vehicle access to what should be an attractive retail corridor.

Both alternatives would end Kennedy’s western partition in a cul-de-sac, with benches and trees around a brick-paved circle to create some semblance of a park. This ‘cul-de-park’ (my term, not Sigma’s) would be hemmed in by a busy street, the backs of some houses, and a gas station. 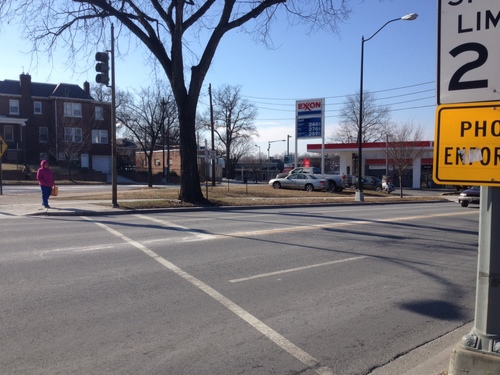 Looking toward where the park would be on Kennedy Street from Missouri Avenue. Photo by Danielle Parsons Smith. 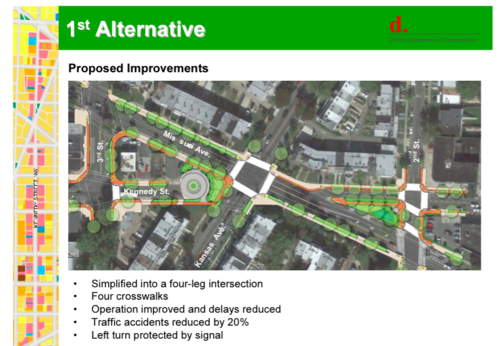 DDOT’s first alternative plan for the intersection would cul-de-sac Kennedy on the west, and close the eastbound left turn. Image from DDOT/Sigma.

In the second alternative, a new traffic signal maintains two-way access to Kennedy Street from Missouri Avenue, but it closes off 2nd Street NW. Both alternatives take space out of the small triangle of green space enclosed by the three streets to widen Missouri and accommodate traffic. 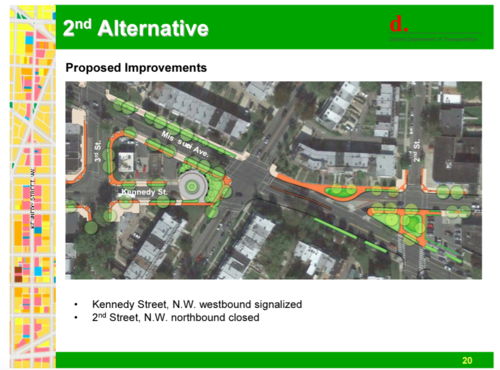 How can DDOT do this better?

At the meeting, DDOT Program Manager Paul Hoffman and Sigma’s traffic engineers emphasized that Missouri Avenue is far busier than Kennedy Street, saying that closing off Kennedy would create a streamlined four-way intersection of Kansas and Missouri with shorter traffic light cycles and longer pedestrian crossing times. Attendees were skeptical, with many lamenting that the plan would further partition Kennedy Street from the fast-moving Missouri, weakening its potential to be a neighborhood commercial hub.

One attendee said Sigma’s intersection alternatives undercuts the unified mixed-use community envisioned in the Office of Planning’s Kennedy Street Revitalization Plan of 2008, which was the basis for the project in the first place.

The needs of neighborhood pedestrians and regional commuters often conflict. But the Revitalization Plan envisioned potentially buying the gas station at west end of the intersection to create an urban hub park for the community, while keeping the streets open to traffic.

Some attendees also noted that Sigma’s plans included little street furniture, and does not reduce overhead wires, utility poles, install signage to denote the neighborhood, or build out the curbs at major intersections. An alternative for an urban park provided pro-bono to KSDA by designer Jose Ayala showed a bit more inspiration. 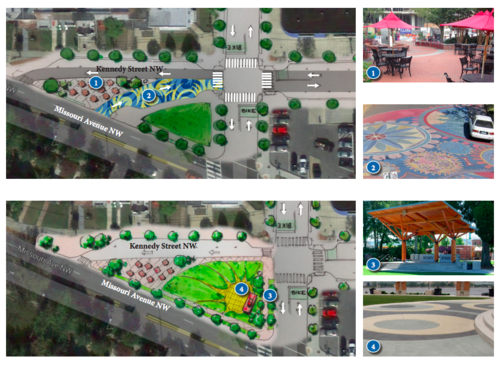 We are enthusiastic to get underway even if there are some kinks to work out. KSDA is now collecting feedback from the neighborhood in meetings and on Facebook. But, we’d also love advice from the many experts who read Greater Greater Washington and know this topic better than we do.

Have an idea about how this intersection can be improved to help businesses on Kennedy Street, or thoughts on what street scape improvements are the most effective on a limited budget? Share it below in the comments. KDSA will be listening!