There is a growing need for children’s play spaces in DC, but some think that playgrounds are unsightly and detract from public space. To address this, the Office of Planning (OP) is holding an international competition to design art-based play spaces for underserved neighbor­hoods. 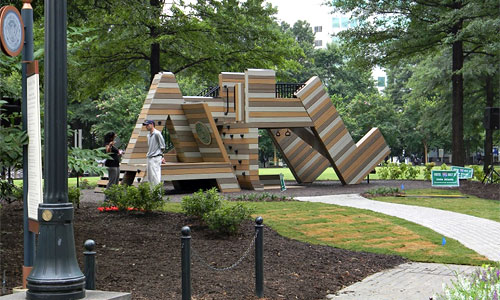 The winner of the Playable10 International Design Competition, a playground in Woodruff Park in downtown Atlanta. The shape incorporates the letters “ATL.” Photo by Cynthia Gentry.

This is the first time DC has held such a competition. “We are responding to the increasing number of families living in the District and their desire for more playgrounds,” said OP urban designer Thor Nelson. “OP seeks a design that approaches play spaces in an innovative way —playable art both kids and adults can enjoy.”

KaBOOM, a DC-based organization that focuses on increasing kids’ access to play, created a map that documents the District’s “play deserts,” where no play area exists within a half-mile walk of a given neighborhood. Mt. Vernon Triangle, NoMA, and Southwest particularly need play spaces, as more families with kids move there. 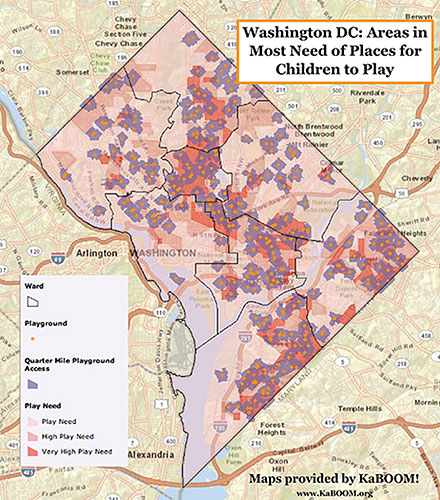 Furthermore, studies reveal that minority and low-income communities are less likely to have safe places to play and be active, impacting child well-being. Children in poverty are 159% more likely to be deprived of recess; 70% African American and 81% of Hispanic neighborhoods lack recreational facilities; and sidewalks in African-American communities are 38 times more likely to be low quality. As a result, more kids in these communities grow up with obesity and diabetes, in addition to other related health risks.

Ideas about play and playground design have changed dramatically over the years, as litigation in the 1970’s and the release of safety guidelines for playgrounds in 1981 pressured designers and engineers to integrate these recommendations into new play sites. Cities and designers were concerned that parents would launch lawsuits as a result of injury their kids’ experienced. As a result, rubber mats and wood chips began replacing monkey bars and dirt.

Now playgrounds are safer, but at what cost to kids? Research shows that these risk-averse playgrounds detract from kids’ learning. Six kinds of risky play benefit child development: exploring heights, handling dangerous tools, being near dangerous elements, rough and tumble play, speed, and exploring on one’s own. When all playgrounds meet the same standards, kids aren’t challenged and don’t have space to be creative.

However, some playgrounds are going against the conventional wisdom. The Land, in North Wales, UK, is an adventure playground where kids can play with fire and wander on their own. They are supervised by “playworkers,” professionals trained to create and manage a play environment for children. Adventure grounds are already being built across the US, such as the Berkeley Adventure Playground in California and The Anarchy Zone/a> in Ithaca, New York. Additionally, the Beauvoir playground, a favorite playground by the National Cathedral in Northwest DC, has lots of interactive and exciting structures for kids of all ages to enjoy.

In these new play spaces, kids experience self-growth and build confidence. In 2010, the Alliance for Childhood published “The Playwork Primer,” which explains playwork and outlines how groups are working to establish playwork as a profession in the United States.

While the Playable Art DC competition is not looking for an adventure playground, necessarily, OP encourages applicants to approach playground design with varied lenses, and generate ideas beyond common assumptions. “While concerns of safety and liability are important ones, they do not have to negate creative solutions and enjoyable play spaces,” said Nelson.

Interested designers, engineers, and artists can attend an information session tonight, and applications are due on April 24. ArtPlace America awarded OP a grant to fund the winning projects.

Community members will be invited to attend workshops with the designers of the winning projects. The more involved the community in the design of a play space, the more appropriate it will be. “One of the keys to a successful design is communication between community and designer,” said Cynthia Gentry, founding director of the Atlanta Taskforce on Play.”

This is just the beginning of DC’s effort to tackle the community’s growing demand for play spaces. Let’s get creative and encourage kids to do what they do best — play and learn through play.