This 5 story pop-up rowhouse at 11th and V Streets, NW has gotten a lot of negative press. DCist and PoPville had nothing kind to say about it. And while it’s undeniably a silly-looking thing, it’s not actually bad. In fact, from an urbanist perspective, it’s good for the city.

First, a bigger building will allow more people to live in a core city neighborhood. That will help the neighborhood support more stores and services, and reduce car traffic everywhere. Density in the core of the city is a good thing, and a 5 story building is a very reasonable amount of density.

Second, this preserves the narrow lot pattern of its block, versus having one developer buy up multiple row houses and then put in a much wider building.

All other things being equal, a street with several narrow buildings is preferable to a street with a single long building of the same square footage. A streetscape with constantly-changing narrow buildings is more interesting to look at than one with a single long building. Small local property owners, instead of big development chains, are also more likely to own narrower buildings.

Yes, this property looks silly now. But think about the future. Assuming we can’t (and don’t want to) freeze the city in time, densifying infill on small properties is exactly the kind of development we want. If it’s eventually going to be 5 stories anyway, it’s better that this block redevelop property-by-property than all at once.

Pop-ups are the first step towards a street like this one in Amsterdam, which really isn’t such a bad thing. 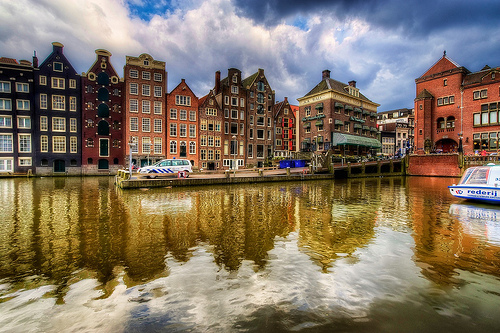 Will this particular building look as good as that picture? It’s hard to tell at this point. It might, but it could just as easily become the ugliest building in DC. Buildings that size aren’t inherently pretty or ugly. There are lots of good ones, and lots of bad ones. What it looks like is not ultimately the same issue as its mass and scale.

The point is, narrow 5-story buildings are a great physical form for city streets. That’s the form of some of the best parts of Paris, London, and New York. Although this will look weird with 2-story neighbors, it pushes the evolution of the block in a good direction.