Streetcars and buses have different strengths and weaknesses, and are better at accomplishing different goals. Flexibility is often touted as a major strength of buses. Although buses are legitimately more nimble in some ways, when it comes to flexibility of capacity, it’s streetcars that have the edge. 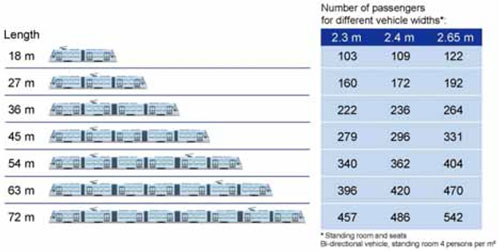 It’s true that buses have tremendous routing flexibility. Since buses can operate on any normal traffic lane, routes can be reconfigured on a whim and individual buses are free to move around obstacles. These are real benefits, and sometimes they mean that a route is best off using buses.

At the same time, streetcars are customizable for high-capacity service in ways that aren’t available for buses.

Streetcars can be longer

In simplest terms, streetcars can be longer than buses. Since streetcars run on tracks, there is no danger of jackknifing. Likewise, since streetcars are powered by overhead wire, there’s not a single engine distributing power. Thus there’s no physical limit to their length.

For example, streetcar manufacturer CAF offers its Urbos model in options ranging from 60 feet long up to 141 feet long. Bombardier’s similar Flexity model comes in any length from 69 feet up to 148 feet.

Portland’s famous streetcar is a relatively diminutive 65 feet long, but longer vehicles are beginning to show up in North America. Cincinnati is using a 77 foot long Urbos for its future line, and the first 78 foot long Siemens S70s have already been delivered to Atlanta. In Toronto, 99 foot long Flexities will soon ply the continent’s largest streetcar network.

And that’s just single streetcar vehicles. Streetcars can also be coupled into trains of multiple cars, so transit agencies that own shorter vehicles can still get the benefits of extra length without needing new railcars.

Agencies that want to run longer trains do have to provide longer stations, but since streetcar stations are typically simple, that’s relatively easy to accomplish.

Ultimately the limiting factor on streetcar length is the size of city blocks. Streetcars can’t typically be longer than one city block, lest they block traffic on perpendicular streets. But city blocks are usually hundreds of feet long, so streetcars can still be much longer than buses.

Streetcars can have diverse interiors

Even compared to buses of exactly the same length, streetcars can support a higher passenger capacity. Since gliding along rails is so much more smooth than rumbling along asphalt, and since there’s no need for huge wheel wells, it’s more practical for streetcars to have a lot of open space that maximizes standing capacity. 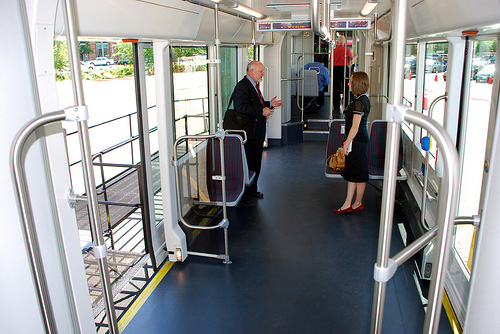 Interior of one of DC’s streetcars. Photo by BeyondDC.

The 3 streetcars that DC has in storage use this strategy. They’re 65 feet long, but they have much more capacity than a 60 foot long articulated bus because of the open floor plan. The trade off, of course, is that they have fewer seats, but only streetcars practically offer the choice.

What kind of flexibility is more important?

Faced with the choice of operational flexibility or capacity flexibility, which one rules?

It depends on the needs of the corridor and the goals of the transit line. Sometimes buses are the correct answer, and other times it’s streetcars.

Sometimes it might make sense to use both on the same corridor. For example, streetcars capable of providing very high capacity might serve most passengers along a line, while buses capable of skipping around traffic might serve longer express trips on the same road.

There are 157 WMATA bus routes in the District of Columbia alone, with hundreds more WMATA and non-WMATA routes around the region. The majority of them are probably better served with buses, but some of them are undoubtedly better fits for streetcars.

The key for decision makers is to embrace the differences inherent to each mode, and decide accordingly.