After decades of disinvestment and suburban flight, the Washington region’s urban neighborhoods are now driving the local economy, says a study from George Washington University professor Christopher Leinberger. However, ensuring that everyone can participate in these communities will be a top challenge for the future.

The report, titled DC: The WalkUP Wake-Up Call, builds on Leinberger’s previous research drawing a connection between “walkable urban places” and economic success. It vindicates smart growth policies which have made so-called WalkUPs the preferred choice for many residents, shoppers and businesses. “What was perceived as a niche market is becoming the market,” Leinberger says.

Leinberger identifies include 43 WalkUPs in the region, specifically “regionally significant” places with a lot of jobs, that either already have urban characteristics or the “intention” to create them in the future. These places are distinct from “drivable suburban” places, which as their name suggests are built around the car. Leinberger then ranks each of the WalkUPs using indicators of economic activity and social equity. 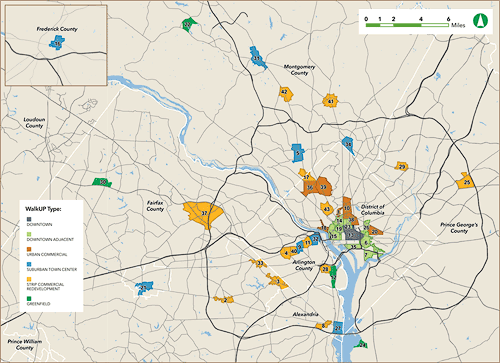 Image from the report.

However, the study doesn’t automatically equate “urban” with “center city,” as most of the WalkUPs are outside of the District. The WalkUPs fall into 6 categories, ranging from “downtown” and “urban commercial” neighborhoods in the District to “suburban town centers” and “greenfield” communities outside of the city.

“Suburban” WalkUPs include historic towns, like Alexandria and Frederick, that later became suburbs, and newer communities like Tysons Corner that are being “retrofitted” with more urban features.

Jonathan O’Connell recently questioned whether you can “export” city life to the suburbs, with some calling the new “town centers” “plastic” or “artificial.” But as Leinberger points out, there’s a growing consensus that the recession and demographic shifts will change the way we arrange our lives and our communities. As a result, the demand for urban living has surfaced outside of center city neighborhoods. If done well, and with the proper support, suburban town centers can become cherished, authentic places and integral parts of Greater Washington’s urban ecosystem. 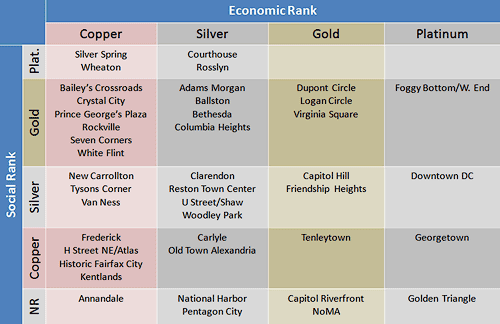 WalkUPs by economic and social rank. 5 WalkUPs were not rated (NR) on the social equity scale due to insufficient or unreliable data. Table by David Alpert.

To determine a WalkUP’s success, Leinberger uses economic and social indicators to rank each one as “Copper,” “Silver,” “Gold,” or “Platinum.” The study notes a strong correlation between a community’s economic performance and its Walk Score, job density and education levels.

Though they take up less than 1% of the land in Greater Washington, WalkUPs already have a third of the region’s jobs. They contain nearly half of the region’s “income properties,” or offices, apartments, hotels and retail space, up from just a quarter in 1992. Office rents and home values in WalkUPs are each over 70% higher than elsewhere in the region. Not surprisingly, WalkUPs tend to contribute more in tax revenues than the amount of land they consume.

The study found that many economically successful WalkUPs, like Georgetown, often failed to create or sustain a diverse population. Almost all of the WalkUPs are located within Greater Washington’s affluent “favored quarter,” generally to the northwest of the city. They’re far from much of the region’s working class, many of whom lack cars and must endure long transit rides to job centers.

WalkUPs are now appearing outside of the “favored quarter,” bringing jobs and other amenities closer to low-income households. While some are successful, others like University Town Center and Wheaton have struggled to develop. Leinberger highlights Silver Spring for seeking economic and social parity. It “walks the tightrope in attempting to achieve higher economic returns without gentrifying and detracting from its unique and diverse character,” he notes. 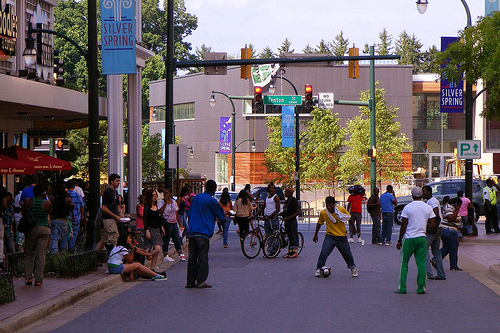 Downtown Silver Spring has managed to stay diverse despite substantial new development. Photo by the author.

To ensure the future economic success and social cohesion of the WalkUPs, Leinberger calls for public policies that direct more development to them through zoning and investment in infrastructure, like more pedestrian-friendly streets. In addition, he says more must be done to provide affordable and workforce housing in WalkUPs, both through subsidies and simply building more housing to meet the demand. He also stresses the importance of building neighborhood support for walkable urban development, which happened in White Flint.

While The WalkUp Wake-Up Call is encouraging to anyone who cares about creating great urban neighborhoods, many of the trends Leinberger highlights have taken hold only in the past few years. Some of the places in the study may be years or decades from becoming truly walkable or urban; meanwhile, a large portion of the region’s development still takes places on the suburban fringe, where it’s less sustainable. On top of that, the benefits of pedestrian-friendly, transit-oriented development have yet to reach the people who need it the most.