Express toll lanes are coming to I-66. Some drivers accustomed to a free ride are upset at the idea, but tolls will help the highway run more smoothly and increase access for car drivers. Most importantly, they’ll improve transit. 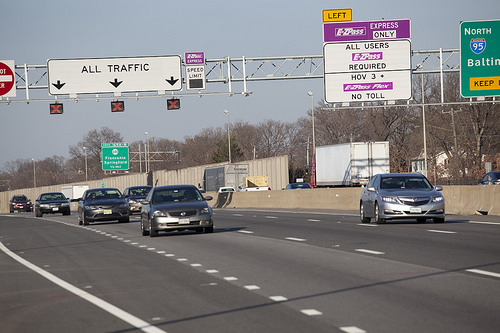 HOT lane on I-95. Photo by Virginia Department of Transportation on Flickr.

High Occupancy Toll lanes— HOT lanes, as they’re called— allow single-driver cars to use HOV lanes in exchange for paying a toll. Carpools and buses drive for free, while cars with only one person (or sometimes two people) pay.

The toll price on HOT lanes varies based on how many cars are on the road.

In theory, officials raise the toll rate to whatever level is necessary to keep traffic moving smoothly.

HOT lanes can lead to more, better transit, but there’s a big “if”

One of the biggest problems with buses is that they’re often stuck in the traffic congestion from cars. HOT lanes provide a way out. Since HOT lanes are supposed to be free-flowing, and since buses can use HOT lanes, tolls create defacto busways, giving buses a way to move along the highway at speed, even if the normal un-tolled lanes are jammed.

But buses can only benefit from HOT lanes if buses are present, and if there are enough of them to be a realistic, convenient option. Unfortunately, that’s a big “if.”

Past Virginia HOT lane projects on I-95 and the Beltway haven’t delivered the bus service planners originally promised. Officials built the HOT lanes, celebrated what they accomplished for cars, and largely forgot about buses.

But it doesn’t have to happen that way. In San Diego, for example, California state law requires the I-15 HOT lanes project to use toll revenue to directly fund high frequency bus service. That’s a good model, and it can work on I-66.

Both the I-66 projects, inside and outside the Beltway, have elaborate plans for more bus service. If those plans actually happen, catching a bus to western Fairfax or Prince William County might become a much more quick and convenient possibility, with frequent all-day buses instead of only a few at rush hour. 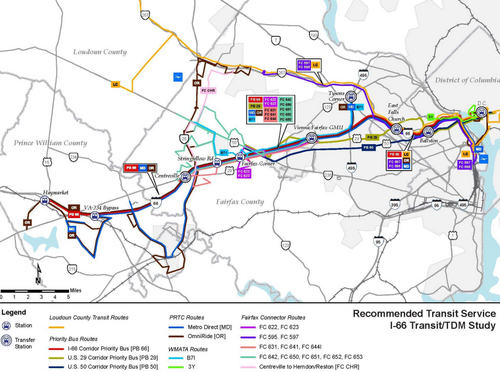 But to ensure transit benefits actually materialize on I-66, leaders will need to lock in guaranteed transit funding as part of the deal. The days of trusting Richmond to deliver are over, after the failures on I-95 and I-495.

Part of the problem on I-95 and I-495 is that a private company helped build the toll lanes, and in exchange gets to keep toll revenue as profit. That means the private company has a vested interest in limiting transit, because everyone who takes a bus is not paying a toll.

But on I-66, at least inside the Beltway, VDOT’s plan is to operate the HOT lanes itself, without using a private company. And without a private company trying to profit, officials can reinvest toll revenue straight into transit.

That’s exactly what VDOT says they want to do. As long as they guarantee that promise with a binding legal contract, it’s a good deal for transit. Much better than if VDOT went the traditional 20th Century route and simply widened I-66, with no thought to transit at all.

To be sure, without a tolling plan, pressure to widen I-66 in Arlington would mount significantly.

Arlington has long opposed any widening, arguing that wider highways ultimately result in more drivers and more congestion. Under VDOT’s current plan, widening won’t be on the table until after 2025, after the bus improvements are in place.

But Fairfax County is already pressuring VDOT to widen sooner. VDOT’s answer has been to try tolls and transit and see how they work, then widen later if it’s still necessary.

Without the option of tolls and transit, that widening pressure would likely overwhelm decision makers.