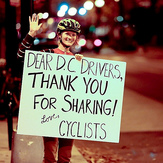 The DC blogosphere is still buzzing over Courtland Milloy’s column yesterday calling bicyclists “bullies” and “terrorists.” If you’ve been offline for the past 18 hours or so, here’s a lightning-round roundup of the internet’s response to Milloy.

Empathy and understanding: David Alpert responds with an entreaty for bridge building instead of finger pointing and derision.

Point by point: Aaron Wiener and David Cranor take down Milloy’s arguments and fear head on.

Cooler heads at the Post: Post transportation reporter Ashley Halsey III responds to his colleagues Milloy and John Kelly with the welcome sentiment that it’s time to tone down the tirades against bicyclists.

Protest tomorrow: DCist has the details on a protest ride to the Washington Post headquarters tomorrow afternoon, and a twitter roundup.

Muppet bikes: If this whole topic has got you down, the video at the end of Ben Freed’s take in Washingtonian should make you smile.

Cyclists by the numbers: Matthew Yglesias pulled together a bunch of graphs about how poor people and Latinos are still most likely to be bicycling.

The bizarro Milloy: What if Milloy had penned an identical anti-driver screen? Ben Harris imagines the alternative.

WABA responds: WABA’s Shane Farthing sets the record straight on the group’s bicycle advocacy. You can help make cycling safer and more inclusive by becoming a WABA member or making a donation.

Bikes on TV: David Alpert was on NewsTalk with Bruce DePuyt this morning, and discussed bicycle issues. Watch the video: