In response to drivers making U-turns across the Pennsylvania Avenue bike lanes, DDOT has completed the first stage of installing a special kind of barrier called a Zebra. Now that the Zebras are out in the wild, will they work? 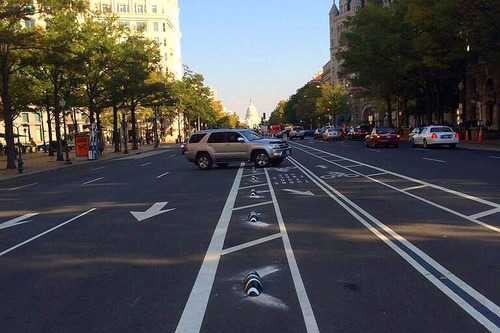 An SUV makes a U-turn on Penn in between the new Zebras. Photo by jwetz on Twitter.

Last summer, Mayor Vincent Gray announced that the District Department of Transportation (DDOT) would work with stakeholders to address an increasingly dangerous problem with illegal U-turns on Pennsylvania Avenue. DDOT’s solution was to install Zebras, a bicycle lane separator from the Spanish company Zicla.

The low-profile barriers can separate bike lanes from vehicle traffic without being visually obtrusive. DDOT chose the Zebras because their low profile does not interrupt the viewshed to the US Capitol, a serious issue for the Commission on Fine Arts (CFA). They’re also bolted to the pavement, meaning they can be removed for the presidential inauguration parade every 4 years.

In September, the CFA approved a pilot project to install the Zebras on two blocks of Penn. Yesterday, DDOT installed Zebras on the south side of Pennsylvania between 12th and 13th streets NW. According to Mike Goodno, DDOT Bicycle Program Specialist, DDOT installed the Zebras on only one block for the time being in order to assess their effectiveness.

How effective will they be?

DDOT’s construction plans call for spacing the Zebras at 10-foot intervals on each edge of the bike lane. However, the manufacturer’s specifications recommended placing them no more than 2.5 meters, or 8.2 feet apart. Subsequent measurements on installed Zebras show the actual separation to be approximately 15 feet center-to-center in violation of DDOT’s construction plans for this project.

This may or may not be narrow enough to prevent drivers from entering the bike lane. However, Zebras also have no sharp edges, which are not only safer for cyclists, but allow emergency vehicles to drive over them when necessary. 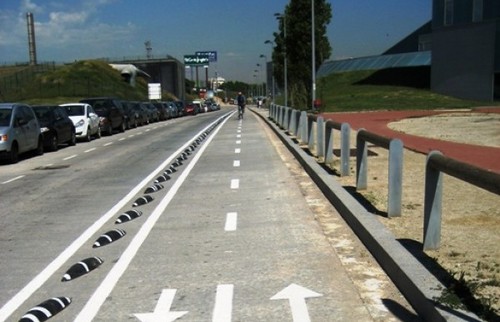 How Zebras are supposed to be installed. Photo from Zicla.

In order to determine the Zebras’ effectiveness, DDOT took counts of illegal U-turns prior to installation and will take additional counts now, in addition to doing a review of crash data. The agency will also look at public feedback about the Zebras to gauge the pilot program’s success. The test results will determine if DDOT will install Zebras along the entire length of the cycle track. 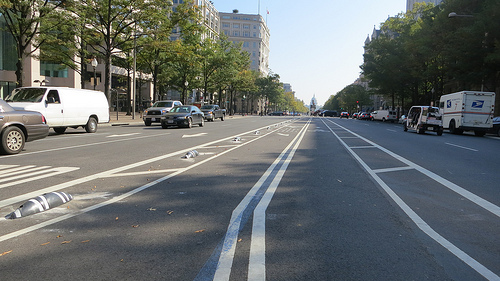 First stage of Zebra installation on Pennsylvania Avenue, other side to follow soon. Photo from the author.

The Zebras’ spacing may lower their effectiveness, reducing the chance of a successful test and making cyclists less safe. Hopefully, DDOT’s test will encourage transportation officials to install them not only throughout the corridor, but in the manner that the Zebras’ manufacturer recommends.