Despite having endorsed bike lanes on New Mexico Avenue in July, ANC 3D will consider a draft resolution asking the District Department of Transportation (DDOT) to delay installing the lanes at its meeting tonight.

New Mexico Avenue forms one of the few street connections between American University and the neighborhoods of Glover Park and Wesley Heights. The resolution, drafted by ANC 3D Commissioner Michael Gold, argues that DDOT shouldn’t build bike lanes “until the completion of a formal analysis and impact study” of the surrounding transportation network which the ANC and neighborhood groups can review.

On Monday, DDOT announced that it plans to complete installing the lanes this week and posted photos outlining where they will go. DDOT has worked with the community to change the proposed design so that it would not take away any parking places.

ANC 3D voted 5-4 in favor of the bike lanes, but commissioner Tom Smith, who opposes them, happened to not be in town for the July meeting. He’s marshaled those constituents who previously expressed opposition to the lane’s installation to once again re-litigate the decision via email messages to the ANC supporting the resolution, which was introduced without proper notice to the community in an effort to reduce supporter outcry. Cycling advocates only found out about it yesterday. 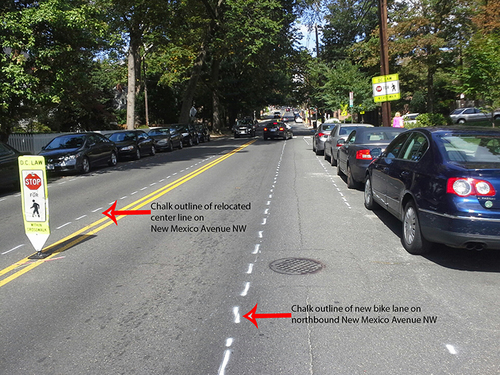 Markings showing where the bike lanes will go. Photo from DDOT.

This bike lane is an important connection in Ward 3, and if you support it, there are a few things you can do: