With the Nationals boasting the best record in the Major League, and the Near Southeast neighborhood coming alive, journalists and smart-growth bloggers alike are again claiming the stadium begot the neighborhood’s transformation. But the neighborhood’s development history tells us the situation is more complex.

The media hammered the storyline of the stadium as neighborhood savior back when the recession brought development to a halt. But now the trope is popping up as fast as cranes on the DC skyline. Even Jim Graham said “it’s clear that if that stadium hadn’t been built, you wouldn’t have all this development.”

Exaggerations like that are just plain wrong. The transformation of Near Southeast began years earlier. New federal and District policies opened land for development, the District’s political leadership changed, and the Green Line was completed, connecting Navy Yard to Maryland suburbs. When the stadium site was announced in 2004, neighborhood development was well underway.

As neighborhood blog JDLand has meticulously documented, the neighborhood’s transformation began in the late 1990s and early 2000s. The District cleared blighted property and the Federal government decided to make the vacant land it owned available for development. In 1996, the District demolished the Ellen Wilson housing project under a Hope VI grant.

Over the same time period, the national and local government were making deals. In the late ‘90s, the Navy awarded a contract to build five new buildings in the Navy Yard as part of the NAVSEA Headquarters Project, the Marines inked a deal to build the Marine Bachelor Enlisted Quarters on the Capper footprint, and Federal and District agencies that controlled land along the Anacostia signed an agreement to develop the ambitious Anacostia Waterfront Initiative.

After a long delay, the GSA finalized deals to bring a new Department of Transportation Headquarters and the massive Yards mixed-use development to the Southeast Federal Center. Around that time, HUD awarded DC a $35 million grant to build more than 1500 new housing units at the Arthur Capper and Carrollsburg project sites, filling most of the area between M Street and the Southeast Freeway from 2nd to 7th Street.

In 2003, the District released the South Capitol Gateway and Corridor Improvement Study, which called for fundamentally redesigning South Capitol Street as a neighborhood boulevard and replacing the Douglass Bridge; and the Council approved funding for Capitol Hill Tower — a combined Courtyard by Marriott hotel and 344-unit apartment that would open in 2006. Finally, in early 2004, planning began on Canal Park.

Cranes were up when the Nats came to town

Prior to the announcement of the baseball stadium, construction was well under way. In 2002, two large office buildings on M Street opened and 4,100 NAVSEA employees started work at the Navy Yard. In 2003 the Federal Gateway building opened and the next year the Marine Barracks.

Maritime Plaza opened its two office buildings in 2001 and 2003. And developers and officials were negotiating or planning other projects, like the WASA site, Half Street, 20M, Florida Rock and Diamond Teague Park, during this time as well.

It was only after all of this had occurred, that District selected the area for the baseball stadium and even later, in a very close vote, that they financed the stadium. It would be another 14 months before the Council passed the lease agreement that would make construction of the baseball stadium possible. In fact, the vast majority of projects — by value, acre or number — in the area had their start before the stadium site was finalized.

Political leadership played a important part in revitalization as well. The election of Anthony Williams as Mayor in 1998 ended the Barry era, and instilled confidence in the business community that investment in DC was safe. The Williams administration spearheaded the Anacostia Waterfront Initiative and worked hard to create an development-friendly environment.

The Federal Government assisted in 1997 with the DC First Time Home Buyer Tax Credit and again in 2001 when Congress dissolved the Financial Control Board. As Garance Franke-Ruta wrote in a recent piece in the Atlantic, “[t]he tax credit had a dramatic impact in encouraging moderate and middle-income people to put down roots in DC, especially younger, college-educated white people, and invest their sweat equity in fixing up rundown housing stock.”

So strong was the change, that in 2002 the Association of Foreign Investors in Real Estate (AFIRE) named Washington, DC the top city in the US and the world for real estate investment, only a decade after being known as the “Murder Capital of the World.”

Another major catalyst was the completion of WMATA’s Green Line. Until 1999, Navy Yard was the end penultimate station on a stub line that only served a handful of stations, all in central DC. That year, it was extended south of the river and into Prince George’s County in 2001 making the area more easily accessible, particularly to suburban workers.

A study of neighborhoods along the Green Line from Navy Yard to Petworth showed that during the 2000s, the area added more young people, more multi-family units, and more jobs than either the Rosslyn-Balston corridor or the Northwest DC Red Line Corridor. The baseball stadium can’t be viewed as the catalyst for the whole corridor, but the Metro line can be.

While development deals and transit improvements played large parts, Near Southeast also benefited from more general forces at work. As the new millennium began, Washington was experiencing a regional boom. Several areas went through a massive redevelopment from 1997-2007 including Gallery Place, Near SE, U Street, Barracks Row, Columbia Heights, and Rosslyn-Ballston. The pattern of development in those areas, over that time period, looks very similar.

At the same time, DC and its neighborhoods benefited from a general return to cities. Not only has DC’s population been growing since the 2000 census, but “28 of the nation’s biggest metropolitan counties grew faster from April 2010 to July 2011 than the rest of the nation as a whole.”

If Councilmember Graham’s assertion that “we wouldn’t have all this development” were true, we’d expect to see development start closer to the stadium after it was built and radiate away from there over time. But mapping out the development, what we see is that almost every lot next to the stadium remains undeveloped. 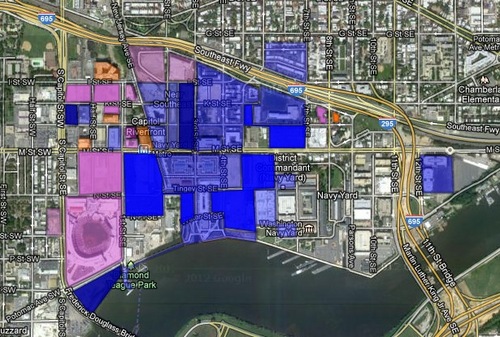 The area east of the Metro station seems to be the core of the transformation, with later work building off of that. Only one property that abuts the stadium, the Camden South Capitol condos, has been developed in the 8 years since the stadium site was announced. You have to look across M Street to find any other post-stadium development, and those 5 properties are as linked to the pre-stadium development as they are to the stadium itself.

No stadium can be just as good

Thanks to New York’s failed bid for this summer’s Olympics, we also have a recent answer to the question of what happens when a stadium isn’t built. The answer is development.

When New York City lost the 2012 Olympics to London, the city revamped its proposed stadium site to create Hudson Yards. This development has so much potential, the New York Times wrote “the Olympic bid’s defeat may have been one of the best things to happen for the city’s growth in recent memory.”

There is no doubt that Nats stadium, by pumping $1 billion into the neighborhood and using eminent domain to consolidate property, may have sped up the Near Southeast revitalization. In time, it may even prove to bring additional development of the area.

But the evidence so far is that, at best, it hasn’t been a drag on the process that was already in place. Near Southeast was a neighborhood on its way when the Nationals were still playing in Montreal.