WMATA planners have been studying possibilities for system expansion, from lines in the center to extensions at the ends of lines. While every Metro enthusiast has fantasized about dozens of Metro lines running out nearly to West Virginia, this “transit sprawl” overlooks better opportunities to strengthen the system’s core.

Adding a line in Arlington is more useful than adding a line to Front Royal. The existing land uses closer in are more conducive to higher ridership because they have higher densities, lower rates of car ownership, and, because of their proximity to existing business districts, enjoy shorter travel distances and times.

Furthermore, closer-in lines improve transit networks, expanding service north, south, east, and west. Far-out lines only provide linear service, that is, north and south or east and west, but not all four. As such, the lines far out are less useful to the people they serve.

Modern rail systems like our Metro, San Francisco’s BART, and Atlanta’s MARTA try to combine long-haul and short-haul services into the same systems. Other cities have wisely divided the two.

Commuters from Long Island are spared the suffering of having to stop 100 times in Brooklyn and Queens just to get to business districts in Manhattan.

At the same time, residents in Brooklyn and Queens get decent service within their own boroughs and to Manhattan. This separation improves the practicality of transit for everyone.

If Metro lines were to extend to the far exurbs, the ride to the area’s business districts would still be long and would discourage ridership. These areas are by definition only peripherally connected to the regional economy and residents would already have less reason to take jobs and commute 20 miles in the first place.

Our geography in Washington, however, is more like that of Paris than New York. Both Washington and Paris are interior cities that just happen to have a river or two running through them. We can expand in all directions, whereas New York, Chicago, LA, and San Francisco are bounded by harbors, bays, oceans, or lakes.

There are some interesting charts in Steve Belmont’s book Cities in Full that illustrate how different cities’ transit systems are spatially laid out.

Draw a circle with a 5-mile radius from Metro Center and the circle will more or less fit just inside the bounds of the DC-Arlington diamond. In that circle, we have 51 stations. Outside of that we have lines reaching as far as Shady Grove, a full 17 miles from Metro Center as the crow flies. The system will reach 26 miles to Loudoun County when the Silver Line is complete. 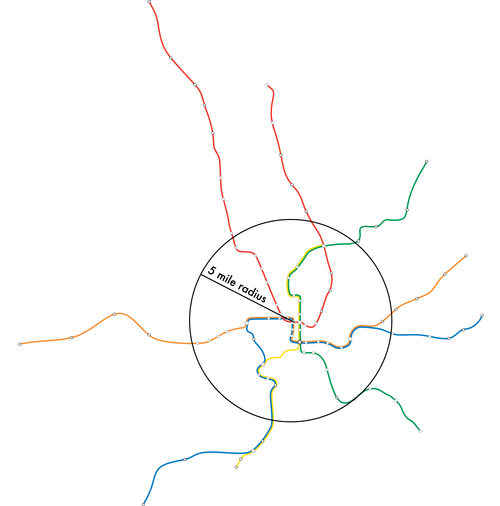 Map by the author.

Now draw the same 5-mile circle for Paris with the Châtelet hub as the center point and you will notice that nearly the entire Métro system fits inside the circle. The RER commuter trains, not mapped, extend far beyond. Parisians enjoy 240 stations in that circle by Belmont’s count.

The distance from Châtelet to Créteil-Préfecture, the farthest station, is only 7.5 miles as the crow flies. In contrast, the Silver Line extension merely begins 8.5 miles from Metro Center. 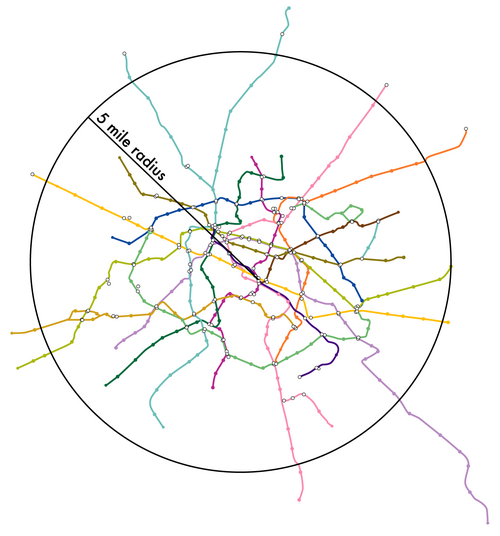 Map by the author.

Not only that, the network they have built makes it practical to take the Métro anywhere in the circle since your travel journey will not stray too far off of a straight line drawn between two points.

We have to prioritize because transportation funding, like funding for everything, is limited. Sure it would be nice to have Metro service to Gainesville. However, such extension fantasies should not come at the cost of providing service to areas closer in where people are more likely to use the service in the first place.

While enthusiasts and politicians tout outward expansion with a pioneer’s zeal, they miss the better opportunities to strengthen the network and construct new lines in the core. Strengthening the core will provide a greater returns on our transportation investment.