Plans for a massive new development planned along Rhode Island Avenue NE include affordable housing, new connections to a large nearby apartment complex, and links to an important bike trail.

An elevation showing the first phase (completed, on the right) and later phases (outlined in white) of the planned Rhode Island Center development. Image by MRP Realty.

Rhode Island Center is a roughly 1,600-residential unit mixed-use development that will rise on the site of the Big Lots and Forman Mills between the Metropolitan Branch Trail and 4th Street NE.

This is the ideal transit-oriented development for the region: lots of housing, both affordable and market rate, a block from the Metro on a site that is currently a suburban-style strip mall. To top it off, it includes needed pedestrian and cycling improvements to the surrounding area.

Developer MRP Realty plans to include about 128 units in the District’s Inclusionary Zoning program, build new stairways up to Edgewood Commons on the hill above it, make improvements to the MBT, install two new Capital Bikeshare docks and provide residents $225 in incentives towards alternative transportation options, like a bikeshare or carshare membership, a benefits package submitted to the DC Planning Commission on 1 August shows.

The project will be built in phases, with the first two buildings fronting the MBT scheduled to open in 2019, confirms MRP’s vice-president of development Michael Skena in an email. Phase one will include about 450 units, with 8%, or about 36 units, set aside for affordable housing. 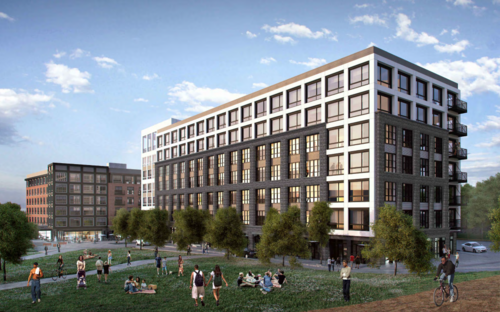 Looking south at the first phase of Rhode Island Center from the MBT. Image by MRP Realty.

Half of the affordable units will be for households of four earning up to $54,300 a year, or 50% of the DC region’s area median income (AMI), and half for similarly sized households earning up to $86,880, the DC Department of Housing and Community Development’s (DHCD) 2016 inclusionary zoning schedule shows. Rents for two-bedroom apartments are capped at $1,222 a month and $1,955 a month, respectively, for the two income groups.

The affordable housing in Rhode Island Center’s later phases will see slightly more units going to needier families, with 5% for those in the lower income bucket and 3% in the higher one.

The income levels for both the first and later phases of the development will be set if they are approved by the Zoning Commission on September 12, says Skena, even if the DC Council passes a pending change to the IZ program lowering the maximum household income level to 60% of AMI.

However, commissioners from ANC 5E, which oversees the area including Rhode Island Center, declined to support the development unless MRP includes nearly double the number of units, 14% of the total, in the IZ program at 60% of AMI, in a letter to the Planning Commission dated July 7.

While further changes to the affordable housing component in the development are possible before the September hearing, they are unlikely to include any units at the lower household income level sought by the ANC.

In July, the DHCD objected to a proposal that affordable units be available to households earning up to 60% of AMI in the Eckington Yards development. While the main objection was to a request by the developer to administer the units itself outside of the agency’s IZ program, the agency emphasized a need for developers to be held to all the District’s existing laws and regulations.

Current regulations require that units in the IZ program are available to households earning up to either 50% or 80% of AMI.

MRP promises to build two new stairways between Edgewood Commons and Rhode Island Center. This would provide residents of the apartment complex with a new direct connection to the MBT and Rhode Island Ave Metro station, eliminating the current about half-a-mile journey through the existing shopping center and up 4th Street.

The planned stairway connecting Edgewood Commons to the MBT. Image by MRP Realty.

The first stairway, which would be located in the northeast corner of the development adjacent to the trail, would be built with the first phase. The stairs would be closed between 1 am and 4:30 am on weekdays, and 3 am and 6:30 am on weekends.

Easier access to the Metro and trail would benefit residents of the mixed-income Edgewood Commons community. It would improve connections between the complex and the east side of the neighborhood, and potentially increase economic opportunities for residents. For example, the time it takes to walk to the shopping center with Giant Foods and Home Depot would be cut in half.

Connections to the MBT are a big part of the Rhode Island Center proposal. The central artery through the project will stretch from 4th Street NE to a new plaza where the trail and bridge to the Rhode Island Ave station meet, and include a new protected bike lane. 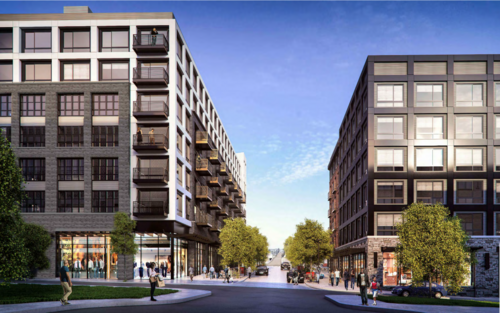 Looking east down the central corridor through Rhode Island Center towards the MBT. Image by MRP Realty.

The developer will realign the MBT so it passes under the stairs to the bridge to reduce pedestrian conflicts in the planned plaza, and make other signage, wayfinding, landscaping and lighting improvements.

The benefits package also includes $10,000 for the connection between the MBT and Franklin Street NE, which was included in the NoMa Business Improvement District’s MBT Safety and Access Study earlier this year.

MRP will install two new bikeshare docks as part of the package. One next to the trail near the planned plaza and one on 4th Street NE between Bryant Street and Franklin Street.