Between July 20th and 31st, Orange and Silver Line trains will share a single track between Ballston and East Falls Church and run less frequently. SafeTrack’s first work surge was in the same place, and there are still a few loose ends to tie up. 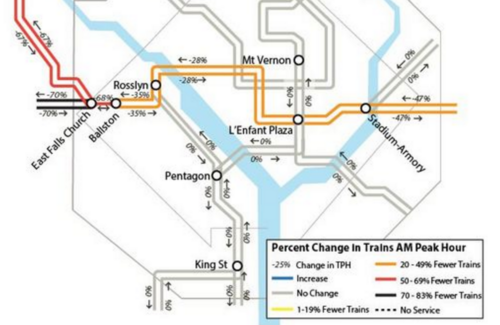 The percent change in how many trains will run on the Silver and Orange lines during SafeTrack Surge 5. Image from WMATA.

Surge 1 work focused on the track typically used for inbound traffic (otherwise known as track “K1”). During Surge 2, Metro workers will hop over to track 2 (K2) and will do a lot of the same work. That likely means replacing rail ties, fasteners, insulators, grout pad, and power cables. In addition to this, workers will also need to finish up some deferred power maintenance that they didn’t get done during Surge 1.

For all riders to the west of Ballston, this means that trains will come only every 18 minutes, 1/3 the number that typically come during a normal rush hour. They’ll run more frequently east of Ballston, both because some Orange Line trains coming from New Carrollton will stop and turn around there and because the Blue Line will keep running its normal schedule from Rosslyn.

How to get around during the Surge

As with Surge 1, some westbound Orange line trains will stop at Ballston, and others will continue to Vienna. The ones that stop at Ballston will probably let people off on the regular outbound platform, turn around, reload passengers, and continue back to New Carrollton. Trains continuing to Vienna and Wiehle will enter Ballston on the “wrong” track, let people on/off there, and continue to their destination.

In other words, the shuffling that caused confused riders at Ballston’s platforms will probably be back. It’ll be possible for trains both heading into and away from DC to pick up and drop off passengers on either platform. So hopefully Metro again has employees in the station helping you out telling you where to pick up the train.

Metro has lots of alternative transportation info listed, including the bus shuttles around West Falls, East Falls, and Ballston, Metrobus routes with additional service, and info on traveling by bike rather than train. If you anticipate being affected by the work, check to see if there’s a bus line, carpooling options, or other transport that might be a feasible alternative during the 12 days of single-tracking.

The Federal Transit Administration recently released inspection data on the first two surges, showing that as of July 14th, inspectors found 109 “defects” in 27 inspections. The Surge 1 area from East Falls Church to Ballston had eight items that needed to be corrected, and there were 26 for the second SafeTrack area, near Stadium-Armory.

The term “defects” is vague, however: a defect could be anything from a burnt out lightbulb in a tunnel, to missing fasteners that could cause a derailment. The FTA defines a defect as “a documented non-conformance or deviation of WMATA’s safety standards, [or] rules or procedure.” So some of the issues the FTA found may be relatively small, but any noted deficiencies shows Metro still needs to work towards minding both the big and little rules when it comes to passenger and worker/employee safety.

Metro’s Deputy General Manager of Operations, Andy Off, commented on the quality of the work done so far during SafeTrack, acknowledging that the agency needs to tighten up on some of the quality control being done. A new feature of SafeTrack is having quality control/assurance employees walking the tracks while work is being done, not just afterwards.

If this procedure change is more tightly integrated with the track work being done and Metro’s new Chief Safety Officer continues to work on the agency’s safety culture, then we should hopefully see these defect numbers diminish over the life of SafeTrack, and further on down the road.