US transit projects are way more expensive than those in similar countries. Addressing the reasons why could help us build more transit. 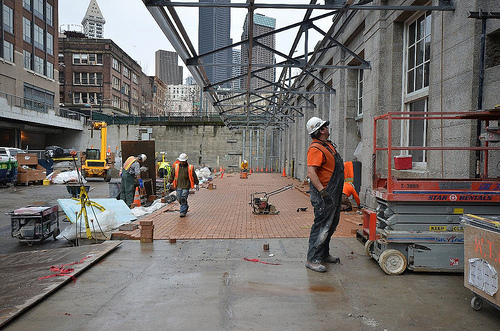 American transit systems are notoriously worse than those in other countries. True rapid transit exists only in a handful of cities, and even there, our systems are known for their unreliable service and decaying infrastructure. Often times we point to underfunding as reason for why this is the case — the US spends a lot of general revenue on highways, after all. But there’s another, often-overlooked reason: building new transit is extremely expensive to do in the US. First, the problem 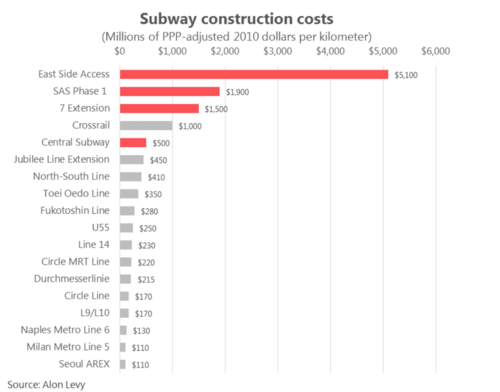 Graph by the author, with data from Alon Levy.

While New York City is the US’s worst offender, other American cities perform dismally too. Take WMATA’s Silver Line, for example. Phase 1 of the project, which is almost entirely above-ground and isn’t located in a dense city center, clocked in at over $150 million per kilometer. In many developed European and Asian countries, this kind of money would be enough to build a fully underground subway line in a dense urban core.

Amtrak also seems to have serious cost problems. Its Gateway project, the sorely-needed plan to increase rail capacity under the Hudson, is estimated to cost $25 billion. And its most ambitious plan for high speed rail on the Northeast Corridor would cost

It’s clear that we have a problem with transit costs. It’s less clear, however, why this is the case. Some people have offered their theories, but none stand out as being obvious:

There are no self-evident answers here. Unfortunately, no one has studied this in detail — perhaps because our leaders seem unaware that we even have a problem in the first place.

One major downside to having a cost problem is that it can be used as an ad-hoc justification to kill transit projects. Maryland’s Purple Line is a recent example. After nearly cancelling the project altogether, Governor Larry Hogan approved a watered-down version of the light rail line, citing the project’s hefty price tag.

We see a similar scenario play out across the country: a light rail line is cancelled for lower-cost bus alternatives. Then BRT creep sets in. And before you know it, we’re left with hardly any transit improvements — all because the public thought the initial price tag was too expensive.

But worrying about high costs doesn’t have to be inherently anti-transit. The opposite is possible: transit advocates should be concerned about high costs because lowering them would open up the possibility of building even more and higher-quality transit.

If your costs are five times higher than what they should be, that means you’re potentially getting five times less transit than what’s possible. If the Silver Line’s costs were more in line with international standards, we’d have billions left over that could be spent on improving Metro. Maybe we could afford the capital upgrades required to run all 8-car trains, ora second Rosslyn station, or even a new tunnel through downtown.

As others have pointed out, the first step to fixing this problem is raising awareness. Talking to our leaders and asking questions about costs might be a good place to start.