One common criticism of bicycling is that it’s all well and good for dense core cities, but isn’t a serious transportation option in suburban areas. Suburbs in other countries prove that’s wrong. 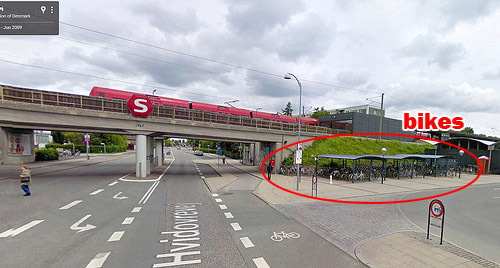 The photo above is from Friheden Street station, in suburban Copenhagen. And look at all those beautiful bike racks. How did they get there?

Anywhere you have a transit station with a lot of other buildings a mile or two away, bikes can help connect one to the other. That includes suburbs.

If you provide the necessary infrastructure, and treat bicycling like a serious option, people will use it.

Unlike central Copenhagen, which is dense and difficult to drive a car through, the area around Friheden Street is suburban and relatively low density. Actually it looks a lot communities around the Washington Beltway.

Compare these two aerial photos, taken at about the same scale. The first image shows the area around Friheden Street station. The second shows Kensington, in suburban Washington. 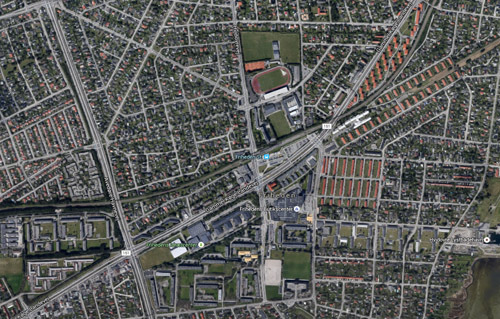 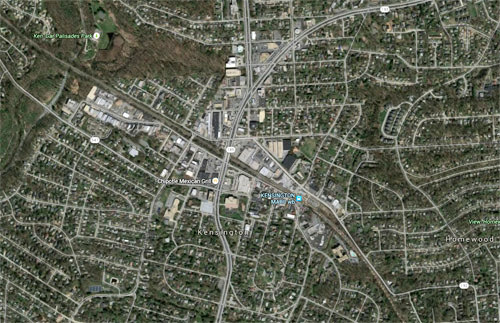 They look pretty analogous. Not exactly the same, to be sure; Friheden has a few apartment buildings sprinkled in, and its S-train station offers better service than Kensington’s MARC station. But they’re not so dissimilar as to be completely alien. They’re siblings, if not quite twins.

I admit I’ve never been to Friheden Street. I’ve never even been to Denmark. Frankly I have no idea if it’s a pleasant community, or what the less desirable things about it may be. I’m sure there are trade-offs to it, compared to an American suburb.

But I happened to be on Google Earth looking at Copenhagen, which is famously a bike paradise, and wondered what its suburbs look like. I turned on Google’s transit layer and started looking at the areas around suburban stations. Friheden Street just happens to be one I zoomed in on.

And look at all those beautiful bike racks.