Some members of a Silver Spring civic association recently tried to keep their new neighbors from joining. While residents rejected the measure, the fact that the issue got consideration at all illustrates how people disagree on who “belongs” in urbanizing communities. 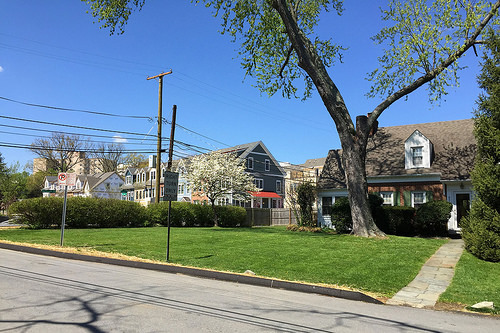 The new townhouses rise behind single-family homes in Seven Oaks-Evanswood. All photos by the author.

The Seven Oaks-Evanswood Civic Association (SOECA) sits in the shadow of downtown Silver Spring, just a few blocks from the Metro station. Nearly all of its 220 households live in single-family homes, though the association recently lost a years-long battle to stop Chelsea Heights, a development of 63 townhomes on the site of a former private school on Ellsworth Drive.

Last week, the SOECA board proposed an amendment to the civic association’s bylaws that would limit membership to “residents of the R-60 zoned areas,” or people living in single-family homes. The amendment would effectively bar the new townhouse residents from joining. The association already keeps out people living in a handful of small apartment buildings within the neighborhood’s borders, which are drawn to exclude nearby high-rise apartment buildings.

The proposal unleashed a fiery conversation in the normally sleepy neighborhood, both online and at a community meeting last night that 50 people attended. But after a vote, neighbors voted 32-17 against the change.

“Will their interests as members of a higher-density tract development coincide with, complement or be in conflict with those of a neighborhood association composed of residents in single-family homes?” asked one resident.

A new street in the Chelsea Heights development.

SOECA president Jean Cavanaugh noted that Chelsea Heights will have its own homeowners’ association, and says that her organization would be willing to cooperate with it. “There are other civic associations that work side-by-side with large townhouse developments that have their own association,” she told me.

She added that this had nothing to do with the fight to stop the development. “We have no issue with the people buying property in Chelsea Heights. Our issue’s with the Planning Board, the county, and [Chelsea Heights developer] EYA,” she told me. “We can distinguish between who we had our battle with and the innocents who are gonna move in to Chelsea Heights.”

Other area neighborhoods welcome all comers

It’s not unusual for neighborhood groups anywhere to fight development. But in Silver Spring, a community that’s generally progressive and tolerant and where many neighborhoods have a mix of housing types, it’s unusual for associations to deliberately exclude people based on what kind of home they live in. 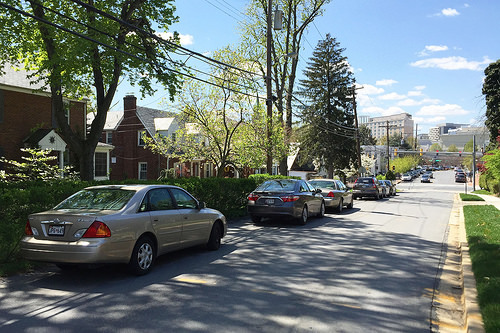 Homes in SOECA are literally next to the high-rises and businesses of downtown Silver Spring.

Next door to SOECA, the Woodside Park Civic Association has a long history of opposing townhouses from being built there, but remains totally open to anyone who wants to join. And the East Silver Spring Civic Association is open not only to townhouse dwellers, but apartment and condominium residents as well.

“The fact that I live in an apartment does not mean I am any less impacted by a nearby development or the loss of a local park, than say a homeowner would be,” says ESSCA president Megan Moriarty. “Furthermore, I think we can come up with better solutions if all voices are considered in the debate.”

Liz Brent, a real estate agent and Seven Oaks-Evanswood resident for 20 years, says that the disagreement reflects a disconnect between how long-time residents and newer residents see the neighborhood.

Civic associations have a lot of sway in Montgomery County politics, largely because they’re so organized. They provide a voice to thousands of residents, and they have done a lot of good in the county, from organizing community events to fighting highway extensions that would have cut across Silver Spring and Takoma Park.

But civic groups also disenfranchise many people, whether by restricting membership to certain residents or by becoming adversarial towards people who disagree. That’s one reason why participation in civic associations across Montgomery County is in decline.

Just 20% of eligible households in Seven Oaks-Evanswood are members of SOECA. I’ve spoken to SOECA residents who supported Chelsea Heights and say they stopped participating because of the group’s eagerness to vilify anyone who supported the development. “I couldn’t think of a decision that had been made that I agree with,” Brent said as to why she left.

While neighbors who fight new development say they’re doing it to “preserve” or “strengthen” their neighborhood, they ultimately weaken community organizations when they push out people who might otherwise want to get involved too. Change is a fact of life, but so is difference and disagreement. Community organizations do themselves a disservice by trying to squelch both.

Besides, I bet that people buying houses in Chelsea Heights, or the renters who are already excluded from participating in SOECA, probably moved there because they like and enjoy the neighborhood. I bet they have a lot more in common with their single-family dwelling neighbors than some would like to admit. And now, we’ll get to find out.