Photo from the report.

There’s a lot of inequality in our region, including housing, where low-wage households living farther out spend more time and money traveling than wealthier ones closer in. A new report quantifies these problems and recommends reforming zoning to build more housing, as well as expanding subsidized housing.

The report, from The Commonwealth Insititute, DC Fiscal Policy Institute, and Maryland Center on Economic Policy, looks at many ways the recent economic growth in our region has helped higher-income individuals and families more than others.

Meanwhile, it’s become more expensive to live in most of our region.

The inner jurisdictions, except for Prince George’s County, have the smallest share of families making $50,000-200,000, though DC and Alexandria still also have more lower-income households than elsewhere. 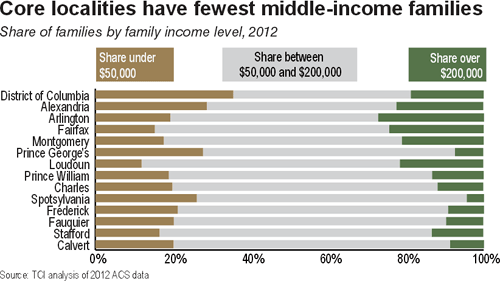 All graphs from the report.

Many households pay more than 30%, or even more than 50%, of their income toward housing. For renters, this effect is worst in outer jurisdictions like Stafford, Calvert, Charles, and Spotsylvania counties. 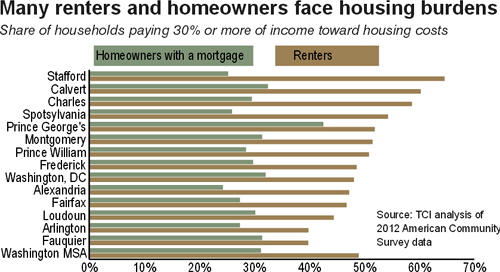 It’s worse for renters than homeowners. It seems likely this is because many homeowners have owned for a number of years with fixed-rate mortgages, meaning their property values (and, often, tax burdens) have risen but their housing payments have not. Renters don’t have that long-term stability, and are also more likely to have moved in more recently.

Overall, for both renters and owners, housing costs are lower farther from the core, but so are incomes. That means that the proportion of “housing burdened” households is about the same closer in and farther out. This makes a certain sense, since people will naturally gravitate toward areas where they can afford the housing. 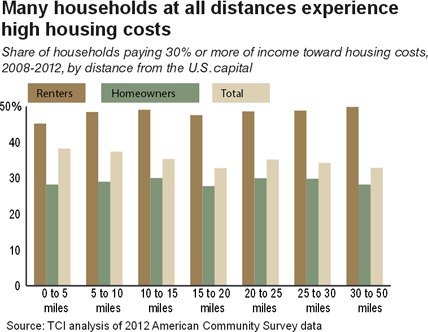 However, that doesn’t tell the whole story. If a lower-income household is paying a similar share of income to live in an outer jurisdiction, those residents also likely face longer commutes than a wealthier household in a central location. Low-wage workers are becoming more likely to commute 50 miles or more than high-wage ones. 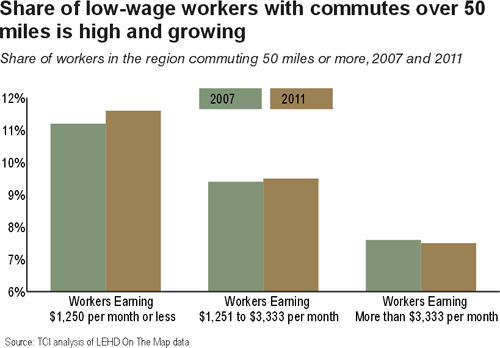 Three of these four localities are in the outer suburbs, where high transportation costs are responsible for the lack of affordability, despite median home values and rents generally being more affordable there than in the core and inner suburbs.

In Prince George’s County, low median family incomes mean that even with relatively low housing and transportation costs, the median household income is insufficient to cover those average costs.

I would add that Prince George’s has poor Metro accessibility compared to Montgomery and Fairfax, making commute times and costs higher. Also, with most jobs having shifted to the west side of the region, it’s not quite as close to as many jobs as its distance from downtown DC might suggest.

The report notes that Prince George’s had twice as many foreclosures in 2011 as the region generally; its rate is comparable to that in hard-hit outer Virginia counties and neighboring Charles County.

What’s the solution? Besides increasing incomes, helping people build skills, and expanding access to health care, a big one is taking steps to make housing more affordable. The report says,

Increasing opportunities for affordable housing for working families through zoning reform (such as removing restrictions on building more apartments close to metro stops) and housing subsidies can help working families live close to their jobs and reduce stress on families and communities.

Many reports on inequality from social justice organizations in the past have not included zoning among the policy tools to deal with housing affordability. It’s great to see TCI, DCFPI, and MDCEP agree that we need to do both: add more housing (and lots of it), and also explicitly ensure that some of that housing in all jurisdictions goes to people at many points along the economic spectrum.