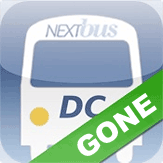 In December, the popular iPhone application “NextBus DC” suddenly stopped working, with little word from the app developer or anyone else about why. We now know what happened, but the route to having better real-time bus services for riders goes far beyond this particular app.

WMATA contracted years ago with a company, NextBus Inc., to generate predictions for its bus arrivals, and to set up end-user services on wmata.com and a telephone number where riders can get bus predictions. That service is called “NextBus.”

Meanwhile, there’s another company called NextBus, NextBus Information Systems. As Kytja Weir reported, the 2 companies split a few years back. NextBus Information Systems kept a right to the bus arrival predictions, and offered an API (Application Programming Interface, a way for one computer system to let another access a certain set of data) to AppTight, an Austin company that built the “NextBus DC” app.

The relationship between NextBus Inc. and NextBus Information Systems ended, the data stream AppTight was using disappeared, and the app stopped working. Since the app, both companies, and WMATA’s service all bore the brand “NextBus” or “Next Bus,” many riders assumed that the actual bus location technology had stopped working, and WMATA did not know where its buses were.

That’s not the case, though sometimes it is. There are many steps in the chain of getting real-time bus data, and many places it can fail.

How the bus predictions work

First, buses have GPS devices on board which send the bus’s position over WMATA’s radio network along with information about which route the bus is operating on. Sometimes an individal device fails, or a driver does not log on with the route information, so WMATA cannot track that one bus. Or, the radio network can go down entirely, and then Metro temporarily has no bus position data.

The data goes to a system, called OrbCAD, in WMATA’s central data center, which aggregates the bus data, Kurt Raschke explained. It sends all of that data to NextBus, Inc. which takes the data, uses its own proprietary algorithm to estimate what time the bus will arrive at a stop.

NextBus then powers the web tool on wmata.com, its own nextbus.com site, and the text message and telephone service. NextBus also hands the data back to WMATA, which provides an API for app developers to get bus predictions. In the next part, we’ll talk more about this API.

But the “NextBus DC” app was not using this API. Instead, it was using a separate API NextBus, Inc. had set up for NextBus Information systems.

What does this mean for riders? There are still many ways to still get real-time bus arrival data. One of the best is actually not an iPhone or Android “app” at all, but a mobile-enabled site, nextbus.com/webkit/. Go there, and if your device has GPS, this site will automatically show yout the nearest bus stops and predictions.

On iPhone, there is still the “DC Next Bus” app (not the same as “NextBus DC”); on Android, many readers use “DC Metro Transit Info.” There are also many others; post your favorite in the comments.