Tonight is the second public meeting for the DC Zoning Update, at 421 7th St. NW in the Penn Quarter. Let us know if you can come to this one, or one of the others in December and January.

Parking seemed like the most contentious issue. There were some people concerned with the elimination of some parking minimums (particularly in the transit zones). They were particularly concerned with spillover into the neighborhoods, which sounded [solvable] with resident-only parking.

There was also a sizable group (I’d guess roughly equal in size to those concerned with parking) that were vocally supportive of what OP [the Office of Planning] is trying to do in regards to parking. The biggest (really only) applause for comments were those who were OK with less parking. Many people there seemed genuinely curious about what the update meant and had some fairly wonky and specific questions.

Let’s talk about what’s in there about parking.

The 1958 zoning code mandated parking for new buildings on the assumption that everyone would be driving in the future. Like adequate public facilities ordinances in the suburbs, this subordinates development to automotive infrastructure. If there isn’t enough room for cars, build nothing until there is.

Predictions that there would be only one mode of transportation, driving, in the future turned out to be wrong. We have Metro, buses, biking, walking, and more. Rather than accommodating demand, requirements to build parking instead create strong incentives for people to drive who wouldn’t have otherwise, pushing the mode share in one unsustainable direction and making traffic worse for existing drivers.

Early working groups for the zoning update considered eliminating almost all or even all parking minimums, but facing pressure from some neighborhood groups, OP backed off and only now propose eliminating minimums for a few categories:

The final set of “transit zones” isn’t set, but OP created this preliminary map showing where they probably will be: 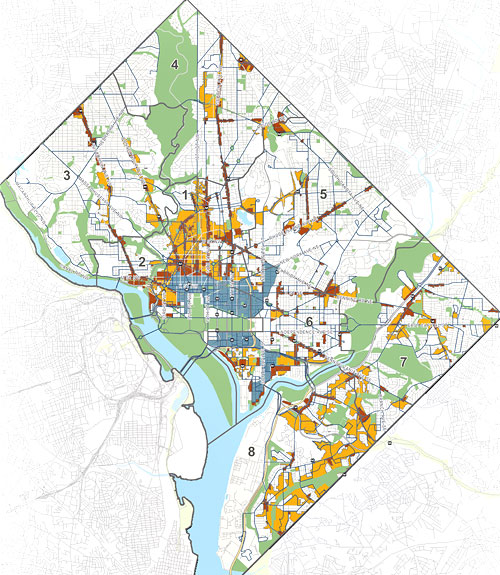 Image from the Office of Planning. Click to enlarge (PDF).

Note that any low-density land, even right next to a Metro station, doesn’t count, even most row house neighborhoods (designated R-4 today). An individual townhouse will be exempt under the small residential building requirement, but any non-residential building like a school, even next to a Metro station, will have to have as much parking as if it were nowhere near the Metro.

The Zoning Commission approved a general proposal to have some as-yet-undetermined parking maximums as well, but the Office of Planning has dropped this from the update.

One proposal had been to allow buildings to build a lot of parking if they want, but require that parking beyond a certain limit use a design that makes it possible to convert the space to other uses, like below-grade retail, offices, or even storage. However, developers said that this would add considerably to the cost of that below-grade space with no immediate benefit, and OP dropped this requirement.

However, anyone can ask for a special exception to exceed this limit if they create a Transportation Demand Management plan which DDOT approves. The BZA also has the ability to require screening and landscaping, or put requirements on where the curb cuts to enter and exit are.

While it’s better for the zoning code to err on the side of less regulation rather than more, a requirement to have a TDM plan for very large parking facilities, and to go through some review process for the design, makes sense. The special exception process does not present an extremely high bar to getting things approved, but it does force people to go through a legal process.

For the individual homeowner wanting to rent out a garage, a special exception is a large burden, but for anyone building a 2.3-acre or larger parking lot, it’s not likely to be. In fact, this would argue for a lower threshold above which the special exception and TDM process kicks in.

A number of rules guide how a parking lot or structure can be designed. Parking lots over a certain size will have to have trees to create shade and reduce the urban heat island effect. Drive-through queueing lanes have to be a certain length. And so on.

One of the rules in the zoning update, which prohibits parking between buildings and the street in most areas, already became law in 2011, after the Office of Planning brought that particular chapter forward ahead of time as a text amendment.

It’s great that many supporters of reducing burdensome parking minimums made it on Saturday, but we’ll need to keep that up at the other meetings, especially Ward 3 on January 8 but also many other wards. Please let us know which meeting you can make!